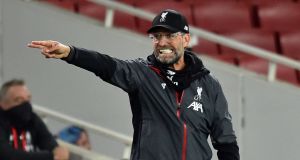 Jurgen Klopp: “Being champion of Europe, England and the world doesn’t happen too often.” Photograph: Glyn Kirk/AFP via Getty Images

Jürgen Klopp has claimed Liverpool’s title triumph ranks as the most prized in world soccer this year and the enormity of ending the club’s 30-year wait will hit home when Jordan Henderson lifts the Premier League trophy.

Liverpool finally get their hands on the coveted silverware following the final home game of the season against Chelsea on Wednesday, with a special ceremony taking place on the Kop to encourage fans to watch at home rather than gather in crowds outside Anfield.

Klopp was overcome with emotion when Liverpool’s long wait for a 19th championship was confirmed on June 25th. But he admits the scale of his team’s achievement in winning the title with seven matches to spare, and after a three-month interruption due to Covid-19, will not sink in until the trophy is in Henderson’s hands.

The Premier League have granted Liverpool special dispensation to allow families of the squad to attend the presentation.

The Liverpool manager said: “I always thought it would be much nicer to win the league pretty early than going to a Champions League final where everything goes to this specific point – all or nothing.

“Now we won the league seven matches before the season ends, which is absolutely incredible. It’s 100 per cent the moment when we get the trophy which will be what it’s all about. I think it’s one of the big stories in football history.

“If somebody would have said: ‘You can become champion in any country this year and you can decide which team you want to be in to have it very special’, I think the choice would have been Liverpool. Because it was the one that everybody wants to be part of, and we are lucky enough to be part of this. I appreciate that a lot, to be honest, that it’s a really big one.

“Not that other championships will be forgotten by supporters but, this one, I think nobody will ever forget. It’s not possible. That makes this pretty special.”

Henderson will have lifted the Premier League trophy, Champions League, Club World Cup and Uefa Super Cup within 14 months as Liverpool captain and Klopp has told his players to savour every moment of Wednesday’s ceremony.

“It was for sure the most exceptional and successful year of my career,” the Liverpool manager added.

“Being champions of Europe, England and the world doesn’t happen too often. I think it makes sense that we take a picture with all four trophies (at a later date) because I don’t think there are a lot of pictures in existence where a club has all four of these trophies. We will do that 100% and rightly so.

“I have mentioned to them that this is absolutely special. You talk about things after a season but this is the moment that you really have to cherish. It didn’t start for this team 13 or 14 months ago but we won all that since then so that makes it really special.”

Henderson is the only Liverpool player who was at the club when Chelsea shattered Brendan Rodgers’ hopes of winning the league in 2014. The midfielder, currently sidelined through injury, was suspended for that 2-0 defeat.

“What I heard from everybody was that was the main reason Liverpool couldn’t make it over the line,” said Klopp. “It is so deserved that Hendo is lifting the trophy. I heard when Liverpool won the title the last time, the captain, Alan Hansen, had a knee injury too. The circle closes if you want. The 2014 game is not a helpful one for tomorrow otherwise I would use it. It’s just a nice story and Hendo had to be patient to put it right and he has done it.”

Meanwhile, the chief constable of Merseyside Police, Andy Cooke, has warned Liverpool fans his officers “will take action” should crowds gather outside Anfield on Wednesday.

“We will have a full policing operation in place at the ground and surrounding areas,” said Cooke. “My officers will take action if people fail to adhere to social distancing regulations and potentially put other members of the public at risk.”

1 Waterford turn Kilkenny upside down and inside out
2 Jim McGuinness: There is a way to save championship and make it competitive
3 Sordid murder of hurling brothers still resonates in south Galway
4 Klopp furious as injuries mount and VAR decisions prove costly
5 Waterford’s frenzied waves of attacks too much for Kilkenny
Real news has value SUBSCRIBE