World View: US divided on how to respond to the rise of China

We are living through the end of the American world order 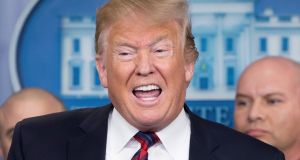 US president Donald Trump: played the trade deficit card that is a longstanding feature of his mercantilist policy profile quite effectively. Photograph: EPA/Michael Reynolds

“In international politics who rules makes the rules.” This elementary truth about the world order underlies the greatest challenge it faces: how the growing antagonism between the United States and China will play out in 2019 and following years.

The year has begun with stock exchange turbulence over this question and how it affects individual companies like Apple whose sales have fallen in China.

The Trump administration gave the Chinese government 90 days to work on a settlement of the trade dispute between the two powers at the G20 summit last November and there are signs that significant action will be taken by Beijing to avoid more crippling US tariffs on a much wider range of goods.

Whether that will that be enough to resolve their mutual antagonism is doubtful. Trump has played the trade deficit card that is a longstanding feature of his mercantilist policy profile quite effectively.

He could be tempted to respond to substantial gestures by the Chinese by claiming a victory domestically and holding off on more outright confrontation before the 2020 elections.

Yet the trade issue is now joined to a much more existential expression of antagonism by his administration to the Chinese regime.

A speech by vice-president Mike Pence last October proclaimed a new Cold War by citing espionage and theft against US technological power, Chinese debt-trap diplomacy in pursuing its hugely ambitious Belt and Road policy connecting Asia and Europe and military aggression in the South China Sea.

Behind this lies a more general fear that China threatens US dominance economically, technologically and eventually politically and militarily this century.

It should therefore be contained and rolled back, according to the hawkish advisors who are now central figures in the Trump administration following recent departures of more realist officials.

There are indications that these fears resonate among leading Democrats, in the business class and military, even if preferred strategies to deal with the perceived China threat still differ radically, ranging from dialogue and engagement through gradual cooptation and lock-in to the hawks’ outright hostility.

The world now combines multiplicity and complexity, interconnectedness and interdependence in ways unheard

International relations theorists argue over historical parallels in discussing the US-China rivalry. The strategic analyst Graham Allison has powerfully invoked the ancient Greek Thucydides Trap between rising and dominant powers to warn that war may be unavoidable between the US and China. Security dilemmas in which military defensiveness increases the risks of war are invoked.

Power transition theories involving parallels between the dominant British and the rising Germans during the late 19th and early 20th centuries which gave rise to the first World War are regularly invoked.

Others like the Indian-US scholar of Asian affairs Amitav Acharya say these parallels with earlier imperial rivalries are misplaced.

Nuclear weapons fundamentally change the reality of war and international organisations and law are far more powerful than a century ago.

The world now combines multiplicity and complexity, interconnectedness and interdependence in ways unheard of then, he argues. We are living through the end of the American world order with the rise of other powers, especially from the Global South, to a leading role. We therefore need to understand the rivalry not in terms of US decline and China’s rise but of a wider reordering, Acharya believes.

Nevertheless rules matter, especially those that underpin world order. They are made by those who rule and yield power, according to the Oxford-based scholar Christopher Layne.

In the Chatham House journal International Affairs a year ago he argued that the key geopolitical question of our time “is whether the declining hegemon in East Asia, the United States, will try to preserve a status quo that is becoming increasingly out of sync with the shifting distribution of power, or whether it can reconcile itself with a rising China’s revisionist demands that the international order in East Asia be realigned to reflect the emerging power realities”.

Such a realist judgment is hard to resist in the East Asian setting. Layne believes the alternative to such a realignment is a Sino-American war. He compares American analysts who say China can be locked-in to an amended liberal international system to the naive British ones who said the same about the Americans before Suez in that previous transition of hegemonic power.

That is all the more reason to pay close attention to the US-China issue and its worldwide effects this year. Despite its relative decline the US retains the military power and economic muscle through the dollar’s world role to leverage allies and defend its interests.

1 Mother and two children found dead at south Dublin house
2 Cork shootings: Gardaí find lengthy apparent suicide note on one of the dead men
3 Róisín Ingle: Five ways to find joy in a pandemic. Only one of them is illegal
4 Johnson’s Brexit Bill set to be blocked by House of Lords
5 Michael Harding: Three reasons you’ll never see a cat in Donegal
Real news has value SUBSCRIBE