Why we should be concerned about Germany’s political situation

World View: German direction following the Merkel era will impact on all Europeans 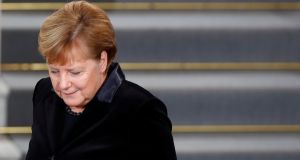 German chancellor Angela Merkel. Her exit is marked by the rise of a right-wing populism. Photograph: Axel Schmidt/Reuters

“I am astonished about the chutzpah of the German government that believes it can win over partners when it comes to the policies that matter to us – refugees, defence, foreign and external trade – yet simultaneously stonewalls on the central question of completing EMU politically.” – Jürgen Habermas

Angela Merkel’s announced departure from leadership of the German Christian Democrats closes a historic period when she oversaw an expansion of German power and influence over European integration through the global financial crisis and then the rise of populist parties sharply critical of the direction she took. The race to succeed her opens up space for a debate on where Germany will go in Europe over the coming period.

Merkel’s passing is marked by the rise of a right-wing populism in Germany itself, as the Alternative für Deutschland party establishes itself in all the länder and now scores about 15 per cent in votes and polls. It embraces a renewed German nationalism alongside a global trading ambition and hostility to immigration, and wants Germany to leave the euro or refound it on a smaller northern core.

Its breakthrough has normalised such positions by drawing German politics to the right. The CDU faces a choice between pursuing that path or finding new variants of Merkel’s centrist social liberalism and commitment to European solutions. During her ascendancy, the country became more introverted and complacent with its economic success, losing sight of the reciprocity that animated earlier phases of its European policies, according to critics like the philosopher and sociologist Habermas.

His left-liberal stance on integration has influenced a generation of academics and activists. Rejecting German nationalism, they call for a post-national future for Europe based on a shared public sphere to create common politics and crossnational social and economic policies.

In a recent address to a university audience in Frankfurt, Habermas is much more pessimistic about the actual course of events. He is particularly disheartened by the failure of social democratic parties to develop alternatives to the market liberalism animating national politics in Germany and elsewhere. He admires Emmanuel Macron’s ambitious efforts to strengthen the euro and create a European army. But he argues that German reticence in responding is short-sighted – and fundamentally against Germany’s own interests.

Rather than creating convergence between richer and poorer regions and countries in the European Union, the incomplete euro regime and the lack of a redistributive capacity have widened inequalities. That is most marked between north and south but also applies between east and west. Populism originates in those divides, he argues, rather than in the more recent immigration crises.

Germany is deaf to such criticisms, attacking ideas about a redistributive transfer union as creating moral hazard and failing to understand that its own prosperity predicated on continental free trade and export markets requires political reciprocity and mutual policies. As he puts it, “the rigid rules-based system imposed upon the euro-zone member states, without creating compensatory competences and room for flexible joint conduct of affairs, is an arrangement to the advantage of the economically stronger members.”

Ulrike Guérot, another left-liberal critic of German policy, points out that while goods, capital and labour in the single market enjoy equal cross-national access, citizens don’t. Together with the Austrian novelist Robert Menasse and theatrical groups throughout the continent (but not in Ireland), she is launching a European balcony project to mark the anniversary of the end of the first World War with a call for a European Republic based on popular sovereignty, cities and regions.

While Habermas takes a bleak view of current European politics from an academic perspective, as an activist he has linked up with an influential group of German leaders to urge change. Writing in the business daily Handelsblatt with Hans Eichel a former finance minister; Roland Koch a former Hesse state premier; Friedrich Merz a lawyer and CDU politician; Bert Rürup, Handelsblatt’s chief economist; and Brigitte Zypries, a former justice minister and economics minister, they call for greater solidarity, a European army, a core Europe centred on Germany and France, a stronger euro and more compromise from Germany to achieve all this.

The most interesting figure here is Merz, the more Europhile of the three main contenders to lead the CDU. He wants a more substantial and sympathetic German response to Macron’s European agenda, especially on the euro zone.

This debate should be watched, since all Europeans will be affected by its outcome.