World View: EU needs to rethink its attitude to Africa 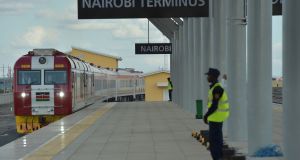 Competition from China for infrastructure investment in Africa has been a stimulus for change. Photograph: Simon Maina/AFP/Getty

Political relations between Europe and Africa are being put on a new footing in recognition that Africa will become a far more significant continental partner this century. Its population could double by 2100, when one in three of the world’s people would live there. If they are to have a sustainable life, a huge effort must be made to create the jobs and conditions needed.

Last year, the European Union and the African Union agreed at a summit in Abidjan to deepen their relations. In September, the European Commission published a plan to create much stronger economic links based on investment, trade and employment opportunities. The private sector, including smaller enterprises, education and markets are given priority alongside aid and development which usually bolster public sectors. Security and migration issues are also prioritised from the European side.

African analysts welcome this greater engagement with the EU but ask how far it goes in policy and practice to equalise and restructure the relationship with former colonial powers. Much of the interaction with Europe happens bilaterally with individual states rather than through the EU. Given that the African Union is newer and weaker than the EU, asymmetries of power persist.

They are expressed through language which reflects practices of inequality and a Eurocentrism which reifies European political experience and events into desirable universal norms, against which African history is often seen as deviant or pathological. The old colonial racial and civilisational hierarchies are reproduced in fears of migration and religious extremism.

It matters what the new links are called, according to Toni Haastrup, a Nigerian scholar specialising in the subject from the University of Kent. There are different priorities on each side, and a hierarchy of scale, wealth and power which should be brought out into the open when one talks of an EU-Africa alliance or an Africa-EU partnership. One can notice a similar embeddedness of assumptions in the phrase British-Irish relations during the Brexit crisis. Given the contrasting policies involved it is often more accurate now to talk of Irish-British relations depending on the prism used.

Addressing a recent workshop organised by the Political Studies Association of Ireland and the Department of Foreign Affairs and Trade, Haastrup argued that although a post-colonial analysis is no longer sufficient to account for the Africa-EU relationship it does prompt really salient questions. She asks whether the treaty which brings the 28 EU member states, the 54 African and 20 Caribbean states together to negotiate trade agreements in the African, Caribbean and Pacific Group of States is any longer fit for purpose in this new geopolitical setting.

One reason the EU is renewing the relationship is that the model is no longer the only show in town. Competition from China for infrastructure investment in Africa with different or less onerous conditionality has been a real stimulus for change, according to Felix Fernandez-Shaw, director of international co-operation and development in the European Commission, who also spoke at the workshop. He acknowledges the shift from public to private sectors and from aid to trade and investment is a real challenge for those involved in the development sector.

A new White Paper on international development is being prepared by the Government to address these challenges and is currently open to public consultation. Africa looms large in Ireland’s aid and development effort, reflecting historical religious and educational ties as well as anticolonial solidarities. We know too little about Francophone Africa and are expanding representation there. The shift to a more economic focus raises questions about growing inequality in Africa as well as links between trade and aid. Worldwide remittances from diasporic communities come to an annual $613 billion, four times global aid budgets.

Simon Coveney, Minister for Foreign Affairs and Trade, takes a particular interest in African policy. He describes the relationship between Europe and Africa as “totally inadequate” and not fit for purpose, given that EU summits with the African Union took place only every four years and foreign ministers met only annually. A sustained high-level politics is required to put that right, he believes, taking full account of the need for equality and mutual respect.

He sees the demographic and migration issues as symptoms of that deeper failure to engage. Gender issues are central here. Research evidence shows that when women are empowered to control their fertility and can see a good educational future for their children, they are much less inclined to have the larger families that so explode Africa’s youthful population beyond its currently available resources.