World View: May’s current impasse is due to a failure to choose from three options 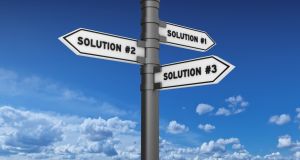 Theresa May’s domestic political failure to resolve her trilemma is brutally expressed in the current convulsion and parliamentary impasse over Brexit. Photograph: iStock

It is a useful way to think about the choices facing Ireland and the UK over Brexit, now that the prospect of no deal being reached with the European Union on the terms of the UK’s exit is so much in play. It also helps clarify how Ireland’s choices are constrained by the wider geopolitical setting embedding Brexit.

Theresa May’s Brexit trilemma was concisely expressed by John Springford of the Centre for European Reform in London last March. He argued that she must choose two of three options: an exit from the single market and customs union, no hard border with Ireland, and an all-UK approach to Brexit. All three cannot be achieved at the same time.

Exiting the EU’s customs union and single market were set out as red lines in her strategic speeches about Brexit. No hard border with Ireland became legally entrenched in the backstop agreement with the EU 12 months ago. To avoid a rupture with the Democratic Unionist Party on unique or special status for Northern Ireland, May moved towards an all-UK approach to Brexit over the last year.

In the negotiations this autumn the EU made a major concession to her by agreeing to an all-UK approach. This allows paid but unrepresented access to the customs union and single market until some other arrangement is reached, but on condition that the Northern Ireland backstop remains unless it is so superseded. The DUP and hard Brexiteers reject this because they say it locks the UK into the EU regime, while France and other EU members say it would allow the UK cherry-pick access to that regime unless there are regulatory controls in the Irish Sea. May’s compromise agreement with the EU offers a partially blind and postponed deal.

But May’s domestic political failure to resolve her trilemma is brutally expressed in the current convulsion and parliamentary impasse over Brexit, which finds MPs split three ways over these favoured options. Intense British pressure on the backstop arises from a belated realisation among Conservative MPs that Irish negotiators saw the strategic importance of the choices on offer more clearly and mobilised the EU to that view.

The backstop called the bluff on British efforts to use the Irish border as a pawn in the negotiations, in an ancient divide-and-rule approach to Europe which earned them the title “perfidious Albion”. They are weaker now – and made decisively more so by moving outside the EU club. Perfidy survives but as resentment not power, making a no-deal card the last one to play. It should not be underestimated politically or psychologically, since in such convulsions emotional political identities override rational calculations of economic interest.

The realisation that these factors are at play in Ireland too has come slow to this generation of British Tories, as is recognised in a perceptive blog by Paul Goodman on the ConservativeHome website on British-Irish relations. He puts special focus on the contrasting emotional bonds with Europe after both joined the EEC in 1973 in our respective political cultures. “The European project liberated Ireland, opening up new horizons wider than those offered by its neighbour, while constraining Britain, binding its policy to a bigger enterprise.”

Winston Churchill insisted in May 1922 that minorities in both parts of Ireland should be left “to stew in their own juice” after partition in 1920 and the 1921 treaty. The UK’s Brexit convulsion is the culmination of their post-imperial trauma. Its juice is very much of their own making. Their trilemma must be resolved internally before the EU can rationally respond.

Those tempted to return Churchill’s compliment should ponder another threefold choice made by Ireland in recent decades. Escaping simple peripheral dependence on the UK, Ireland added to it more favourable peripheralities on the EU for development support and on the United States for multinational investment and trade. By smartly orchestrating all three dependencies, Irish governing and commercial elites have transformed the country economically and politically.

They now face a potential trilemma as these three external cores – the UK, the EU and the US – diverge in terms of policy and political culture. A hard or no-deal Brexit will align the UK with Trump’s US and away from the EU, whereas a softer one keeps it closer to the EU.