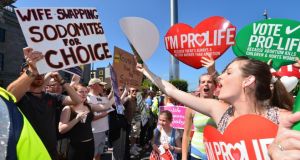 “The grassroots movements will continue to dominate Irish society, social change and political activism, as they have done in recent years.” Photograph: Alan Betson

What a year: 2018 was the year that changed Ireland, and don’t let anyone take that away from you. The aftermath of the Eighth Amendment repeal referendum has been an odd one. The bruises will be felt for a long time, but the work that everyone involved in the campaign put in, and the change that the result brought, marks a generational moment that will be profound. The reproductive rights of women are fundamental; something that is so important it remains a battleground almost everywhere. Ireland changed itself and the world. Reflecting on that at the end of the year, it’s almost hard to digest.

I didn’t want to talk to anyone about the referendum after the vote. I still find it hard to talk about. What is that about? Avoidance? Compartmentalisation? PTSD? I realised how long it takes to heal from these things only when I first started canvassing in March and the wounds from the 2015 marriage-equality referendum surfaced, the stitches I thought were healing scars pinging open. Breaking yourself is easy – too easy; it’s the repair that’s harder.

Straight people have a tendency to assess the 2015 referendum in incredibly celebratory tones, like neutrals gunning for the underdogs to win a final. I understand that, and I know that straight people don’t mean any harm when they characterise the marriage-equality referendum moment as purely positive. It’s difficult to understand the trauma of others when it simply can’t be yours.

A continuation of this blind spot is the hardship queer women have been through in both referendums. They first had their sexuality and identities thrown to the wolves of national debate in 2015, and then their bodily autonomy to fight for. While navigating the difficulties of the referendum campaign this year, I often heard straight women say a version of “This must have been what it was like for gay people the last time,” without acknowledging that “gay people” includes women who were experiencing what straight women were experiencing this year too. I doubt there is any harm intended in such remarks. The power that resided in the coming together of people of all sexualities and genders is what should be remembered and continued. There’s little point in splitting hairs.

One thing that is noticeable for everyone is how difficult the referendum recovery has been. Part of this is due to the media’s failure to play its necessary role in processing the aftermath. Instead of accurately reflecting the feminist people power behind it, the media held up a distorted funhouse mirror.

RTÉ, in particular, had some decent coverage but also terrible, embarrassing moments throughout. In the aftermath of the referendum they stuck to replaying campaign arguments after a landslide result. RTÉ replicated this in the aftermath of the presidential election, chasing human clickbait. It felt as though we were stuck in campaign purgatory listening to Marian Finucane’s programmes and Seán O’Rourke’s.

What has always been the white noise of reporting of sexual and physical violence against women day in, day out, became unavoidable tinnitus

Print media, which had largely missed a movement and concentrated instead on political personalities, continued down that track. Things that occur outside the traditional power structures are often dismissed by the media establishment, or seen to be not as “serious”. The irony is that the spats, personalties and gossip of party politics are in fact the trivialities.

The grassroots movements are the bigger picture, and will continue to dominate Irish society, social change and political activism, as they have done in recent years. The media’s blind spot is its failure to see how these movements as connected. Instead they view protest and organising as disparate, even though they are so obviously cross-pollinating.

Why else has it been hard to recover? I think it’s also because the referendum campaign occurred during a coalescence of news stories of extreme violence against women. What has always been the white noise of reporting of sexual and physical violence against women day in, day out, became unavoidable tinnitus. We couldn’t take the news of another rape, another murder.

This epidemic is a matrix which has become intolerable and which we must break out of. But how? All of these things are connected – controlling women, disbelieving women, demeaning women, punishing women, hurting women, killing women. Perhaps there was an unspoken realisation of futility, that even after we won a referendum so linked to women’s autonomy, the daily threats and horrors faced by women would still exist. Repeal was not a salve, even though we were so invested in it being one.

These post-referendum fears can bog us down. But like the media itself, we too need to see the bigger picture. Wounds close. Scars heal. Bruises fade. But the indelible mark on Irish society will not disappear. The collective power, the grassroots action, the spirit of individuals, the resilience, the creativity, the solidarity, the determination, the love, the hope, the change, that’s what won, not the miserableness or meanness or cruelty or darkness or subjugation. That lost. Every single person who was involved in any way to affect that change owns the legacy of this movement, and together we own it equally. It was the year that changed Ireland, and don’t let anyone take that away from you.