The Irish Times view on the Fourth of July: America’s moral crisis 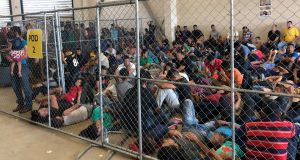 As Donald Trump was presiding over a brash, bombastic military parade to celebrate Independence Day – or, more accurately, to indulge his own vanity – in Washington yesterday, a humanitarian and moral crisis caused by his own policies was playing out on the southern US border.

Reports of the appalling and inhumane conditions in which migrants are being held in overcrowded centres along the border have been circulating for some time, but the scale of the scandal was laid bare this week – by the US government itself.

On Tuesday, the department of homeland security’s inspector general published alarming photos of migrant-holding centres in Texas’s Rio Grande Valley filled with twice as many people as they were meant to hold. The inspector’s office described adults crammed into cells with standing-room only and children being deprived of hot meals and showers.

The 'zero tolerance' policy is aimed at deterrence, but the cost is incalculable and immoral

Migrants were so desperate to leave the centres, the report stated, that when they saw inspectors they “banged on the cell windows, shouted, pressed notes to the window with their time in custody”.

After a separate tour of two facilities this week, two members of Congress said border patrol agents had told detained migrant women that running water wasn’t available and that they should drink from toilets. (The Trump administration has argued in court that its legal obligation to provide “safe and sanitary” conditions for migrants does not necessarily include providing such basics as toothpaste or even soap.)

Criticism of the Customs and Border Protection agency had already been intense after a ProPublica report on a closed Facebook group in which current and former agents had posted jokes about immigrants dying. In a typically cruel response to the uproar, Trump tweeted that migrants unhappy with conditions at detention centres should be told “not to come”.

The scandal at the US-Mexico border is not the result of neglect or incompetence. It is policy. Since January 2017, as an Amnesty International report pointed out this week, US authorities have been instructed to enforce a harsh interpretation of immigration law.

That has resulted directly in the forced separation of migrant parents from their children and the obscene conditions at detention centres. The “zero tolerance” policy is aimed at deterrence, but the cost – in human suffering and the resultant damage to the country’s reputation – is incalculable and immoral.

This is not what America stands for. For every American who responds callously to these atrocious scenes, there are many others who show solidarity with migrants by delivering supplies to detention centres or campaign for a change in policy. But this institutional cruelty is what the Trump administration stands for – and its words and actions are a stain on a great country.