Firms urged to stockpile medicines to prepare for no-deal Brexit 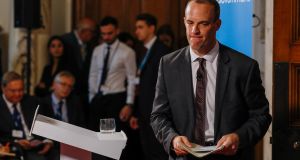 Dominic Raab, the British Brexit secretary, is still confident that a deal can be reached with the EU. Photograph: EPA/Luke MacGregor / POOL

The British government has told pharmaceutical companies to stockpile an extra six weeks supply of medicines to prepare for a no-deal Brexit and warned that businesses will face new bureaucratic hurdles when they import and export goods.

Twenty-five technical notices published on Thursday outlined the impact of a no-deal Brexit on a number of sectors and economic activities but Brexit secretary Dominic Raab stressed that London remained confident of reaching an agreement with the EU.

“I am still confident that getting a good deal is, by far, the most likely outcome. The vast majority, roughly 80 per cent, of the withdrawal agreement has now been agreed, and we are making further progress on those outstanding separation issues,” he said.

The technical notices, the first batch of a total of 84, warned that failure to reach a deal with Brussels would make credit card transactions with the EU more expensive for British consumers. And British citizens living in the EU could be unable to access their UK bank accounts or pensions without an agreement on financial services.

The notice on trade tells businesses importing goods from the EU that they will have to register as importers and decide the correct classification and value of their goods and enter it on a customs declaration for the revenue and customs service (HMRC).

They should “consider how they will submit import declarations, including whether to engage a customs broker, freight forwarder or logistics provider (businesses that want to do this themselves will need to acquire the appropriate software and secure the necessary authorisations from HMRC). Engaging a customs broker or acquiring the appropriate software and authorisations form HMRC will come at a cost”.

Britain would continue to accept medicines tested in EU member states and Mr Raab said he would expect the EU to act with similar “good faith” and flexibility even without a Brexit deal.

“Most of the worst-case scenarios, being bandied around, imply that the EU would resist all and any mutual co-operation with the UK. In reality, I find it difficult to imagine that our EU partners would not want to co-operate with us even in that scenario in key areas like this, given the obvious mutual benefits involved,” he said.

Labour’s shadow Brexit secretary Keir Starmer said the technical notices and Mr Raab’s speech showed that the government was not prepared for a no-deal Brexit.

“We are eight weeks out from the deadline for reaching an agreement. Ministers should be getting on the job of negotiating a Brexit deal that works for Britain, not publishing vague documents that will convince no one. A no-deal Brexit has never been viable and would represent a complete failure of the Government’s negotiating strategy,” he said.

The Confederation of British Industry said the notices exposed Brexiteers’ claims about the ease of leaving the EU on “World Trade Organisation terms” as a fantasy. Frances O’Grady, general secretary of the Trade Union Congress, said they confirmed that a no-deal Brexit was not a credible option.

“It would be devastating for working people. Jobs and rights at work would be under threat, and price increases would hit already-struggling families hard. The government cannot allow us to crash out. The prime minister must throw out her red lines, face down the extremists in her party, and negotiate a deal that works for the whole of the UK,” she said.