Europe must save the British from themselves on Brexit

Chris Johns: Nobody will win if the UK is allowed to crash out of the European Union 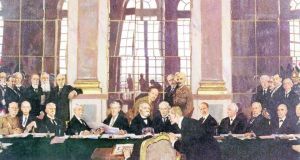 Versailles, 1919: the failure of the first World War’s winners to foresee the consequences of the treaty they forced Germany to sign led to Hitler’s rise. Photograph of William Orpen’s painting courtesy of the Imperial War Museum

Thanks mostly to the efforts of John Maynard Keynes, the Treaty of Versailles, which in 1919 imposed ruinous reparations on Germany after the first World War, is widely described in terms of revenge, as what Keynes characterised as the mendaciously avaricious actions of the winners. The treaty sowed the seeds of the second World War. The victorious powers sought both to punish Germany and to reward themselves. To the negotiators, almost to a man, their objectives seemed terribly logical, if not ethical. But their lack of magnanimity, their utter failure to foresee the consequences of their sincere beliefs, led directly to the rise of Adolf Hitler.

History being what it is, this version of events is not without its dissenters. But anyone who has read Keynes’s Economic Consequences of the Peace is hard pressed to come up with a credible alternative narrative. Keynes was there as one of the most senior UK treasury officials, and he did, with astonishing accuracy, predict what happened in the ensuing 20 years. “The policy of reducing Germany to servitude for a generation, of degrading the lives of millions of human beings, and of depriving a whole nation of happiness should be abhorrent and detestable – abhorrent and detestable, even if it were possible, even if it enriched ourselves, even if it did not sow the decay of the whole civilized life of Europe.” he wrote.

History is mostly forgotten and, therefore, repeated. The senior Frenchman at the Versailles talks, Prime Minister Georges Clemenceau, believed that Europe’s destiny was semipermanent civil war. That, at least, had been Europe’s history over the previous two millenniums. Clemenceau took the view that the modern version of that civil war, conflict between the great European powers over the previous century, was likely to be repeated over the next. Any chance to subjugate Germany had, therefore, to be taken. His expectation was a quarter right. But the events that he foresaw, 25 years on, led the next generation of German and French leaders to very different conclusions. To stop Europe’s never-ending civil wars they founded what was to become the European Union.

There is, perhaps, a line that connects those Versailles negotiations and the ones today taking place between the UK and the EU over the terms of Brexit. We observe yet another manifestation of Europe’s tendency for war. No shots are being fired, of course, but the language and memory of war are often invoked by Brexiteers. Fleet Street in 1919 and 2018 behaves in exactly the same way: the Daily Mail, in particular, was as vindictive towards Keynes as it is today towards anyone who questions the logic of Brexit. Keynes was pilloried for being a European.

The Versailles negotiators of his pen portraits bear uncanny resemblances to those who today bay for the hardest of Brexits. Second-rate leaders uninterested in details or consequences are once again demonstrating the limitations of democracy. TS Eliot wrote The Waste Land partly inspired by the words of Keynes.

Learning nothing from history

The money sought from Germany was never paid. In another version of learning nothing from history, the victors of Europe’s currency wars have visited reparations on the losers that will also never be repaid. Greece is now expected to run impossible budget surpluses until 2060 in order to pay back its debts.

Just as British civil servants, especially in the treasury and foreign office, never thought for a second that Germany would meet the demands of Versailles, I can’t believe anybody at the European Central Bank or International Monetary Fund thinks there is a chance that they will get back what Greece apparently owes them. According to some experts, Germany ended up paying back less then one-sixth of what was demanded in 1919.

The withdrawal agreement that the United Kingdom may or may not negotiate over the next few weeks will not bear such close resemblance to those postwar reparations. At least Germany – and, more recently, Greece – tried to limit the damage being inflicted by the other side of the table. Today the UK negotiators turn up for talks goaded by the Brexiteers to do as bad a deal as possible, to inflict as much damage as they can on themselves. If Keynes were alive today he would write another scathing polemic.

The EU has a big call to make. Having crushed the Greeks, does it now do the same to the British? Does it accede to their weird demands for a dreadful deal? How much should it punish the Brexiteers for their idiocy?

Brussels is looking at opponents squabbling over whether to shoot themselves in the foot or the head. Are EU leaders, unlike their 1919 counterparts, able to see that the time for (limited) generosity has arrived? They have the opportunity to save the British from themselves. Why would they do this? The Versailles negotiators couldn’t see that it was in their own interests not to overly punish the Germans. Europe today runs too many risks from an enfeebled and resentful UK. Europe needs to remind itself of the civilising zeal of the EU’s founders and the values of the Enlightenment. Or, at the very least, the value of enlightened self-interest.

1 Covid-19: Hairdressers, gyms and religious services could return next week
2 Alison Curtis: My guilt at not going for a second pregnancy
3 How to gift your child a house deposit . . . tax free
4 The beginning of the end: 10 things to know about Covid-19 vaccines
5 Q&A: When will we know more about plans to exit Level 5?
Real news has value SUBSCRIBE