Why Ireland wants to join the Francophonie 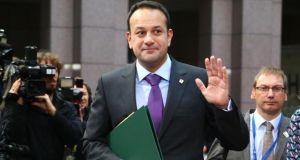 Taoiseach Leo Varadkar. Attending the African summit would have been a way for Varadkar to signal that Ireland was taking an active interest in EU affairs beyond its own backyard. Photograph: Aurore Belot/AFP/Getty Images

One of the collateral casualties of Ireland’s political drama this week was a planned trip by Leo Varadkar to west Africa. On the face of it, cancelling a visit to a part of the world where Ireland has relatively few interests and virtually no diplomatic footprint came at little cost. But the fact that the trip had been scheduled at all was telling.

The Taoiseach was due to go to Mali to visit members of the Defence Forces attached to the European Union training mission there before travelling on to Côte d’Ivoire for the EU-African Union summit in the capital, Abidjan. There were good reasons for going. First, the summit offered Varadkar an opportunity to meet EU leaders at a delicate moment in the Brexit negotiations, with a decision imminent on whether talks on the Border have made sufficient progress to allow the UK’s divorce process to move to the next stage. Second, Irish officials had lined up bilateral meetings with a number of African leaders – a useful opportunity to press the flesh, reflect on tenuous historical links and then get to the point by asking them to vote for Ireland for a seat on the United Nations Security Council in 2020.

Attending the African summit – the type of event Irish leaders have often skipped – was also a way for Varadkar to signal that Ireland was taking an active interest in EU affairs beyond its own backyard – thereby responding to a criticism often heard among EU diplomats in Dublin this year: that a Brexit-obsessed Ireland has shown little interest in the wider future- of-Europe debate.

But the trip was indicative of a broader shift in Irish diplomacy – one largely brought about by the Brexit debacle. The UK’s impending departure from the EU has shone an unflattering light on Dublin’s relationship-building skills. Recognising that a traditional over dependence on Britain as an ally around the European table and a buyer of Irish goods and services is now a greater liability than it ever was, the Irish diplomatic and trade apparatus is having to speedily reorient itself towards places where Ireland has previously had little or no presence.

A clear illustration is Ireland’s recent application to join the Francophonie, the club of French-speaking states, as an observer. The 57-member Commonwealth-style organisation is ostensibly a way of fostering links between French-speakers. As French president Emmanuel Macron pointed out in a speech in Burkina Faso this week, Africa is increasingly the beating heart of the French language. Nearly 60 per cent of the world’s francophones live on the continent. That’s where the language is growing, developing and mutating in new and interesting ways. A 2014 study by Natixis bank forecast that French would overtake English and Mandarin by 2050, largely thanks to an anticipated rise in Africa’s population from 800 million to 4.5 billion in 2100. But the Francophonie is about more than French and its cultural-intellectual heritage, which is why the membership includes countries such as Armenia and Bulgaria, and why Ireland – with its chronic resistance to learning other people’s languages – can apply for observer status without fear of being laughed at.

For France, the Francophonie is a means of buttressing its own influence while encouraging the spread of values such as human rights, democracy and freedom of expression – all of which are written into the organisation’s mission statement. For poorer, more isolated countries, part of the appeal lies in “co-opération économique”, code for money from rich countries. In the mix, however, is a higher purpose: the Francophonie is a stand against the anglophone tide sweeping politics, business and media, and the homogenising effect that has. “La Francophonie is another globalisation – it is another way of seeing the world,” said the French former foreign minister Philippe Douste-Blazy. Jacques Chirac, the ex-president, framed it as part of a battle against “a world where people speak, think and create in a single mould”.

Nothing we know about Irish Government suggests such elevated thoughts are what has drawn it to the Francophonie. The courtship is driven by necessity. Observer status will bring Ireland a little further into the French orbit at a time when that relationship needs work. It will also allow Dublin to develop new relationships, diversify its trade and gather better intelligence – thus, the thinking goes, extending its global influence. Remarkably, Ireland has no resident diplomatic presence in all of francophone Africa, which makes up more than half the continent. So this will be one of the few opportunities Irish officials have to meet their counterparts from regional power-brokers such as Côte d’Ivoire, Senegal or Cameroon.

With his government on the precipice this week, that trip to Abidjan was no doubt easy to drop from Varadkar’s diary, but don’t be surprised if west Africa reappears in his diary before long.