The longer I spend here, the more I love it – the people, the culture, the landscapes 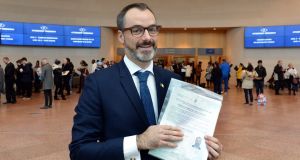 I would like to think this Irishman’s Diary sets a record: at the time of writing, I have been an Irishman for a little over an hour.

On Monday, I and about 3,000 others stood in the Convention Centre in Dublin to declare our fidelity to the Irish nation and our loyalty to the State. I was one of 234 Britons taking citizenship, joined by a broad cross-section of the world’s population. In row after row, there were scarcely two people who looked alike. Women and men, young and old, from Asia, the Middle East, South America, eastern Europe, Scandinavia, Africa. Many twisting in their seats for selfies against the projected backdrop of a giant harp, others scrolling through their phones as the Army No 1 Band played, and at least one in tears before proceedings even began. “You’re all looking very sombre – cheer up,” were the opening words from the official introducing the ceremony. An hour later, the crowds pouring out on to the quays were all laughter, chatter and broad grins. We had entered the hall as strangers but left with one thing in common.

Almost directly across the Liffey, very different evidence of diversity is gathered daily: not in the form of people but of their spit. The genealogy service Ancestry. com’s office on Sir John Rogerson’s Quay is the staging post for home DNA kits on their way for testing in the US. For €95, customers are sent a tube they use to submit a saliva sample, which is analysed against Ancestry’s database to estimate where their ancestors lived unspecified thousands of years ago. This is given as a percentage from each region.

When I moved to Ireland in 2010 to be with the woman who is now my wife, I was returning to my roots, or rather most of my DNA was

A few weeks ago, I submitted my own test. With an English father and a mother who had Irish parents, I expected a high percentage from each side, with maybe a dash of Scandinavian via the Vikings. The results, delivered in a multicoloured pie-chart, were a pulse-quickening surprise: 54 per cent Ireland; 24 per cent Great Britain, 10 per cent Scandinavia, 7 per cent Iberian peninsula, 3 per cent Europe West (France and/or Germany) and 2 per cent Finland/Northwest Russia.

So when I moved to Ireland in 2010 to be with the woman who is now my wife, I was returning to my roots, or rather most of my DNA was. Then again, genes do not define nationality: the new citizens in the Convention Centre on Monday will be adding a variety of new slices to the national genetic pie chart but they and their descendants will still be Irish.

A more spurious gauge of identity was former Conservative MP Norman Tebbit’s “cricket test”. In the early 1990s, he asked if Asian immigrants were cheering for the England cricket team or their old country’s: “Are you still harking back to where you came from or where you are?”

My mother’s father, Joe, who emigrated from Coolderry, Co Offaly, to Leeds in 1936 to find work, never looked back with misty eyes. So tired did he become of his brother-in-law’s booze-drenched homages to the auld country that he made his wife and children turn out the lights and hide when they saw him approaching. When this failed, and the visitor once again launched into How Can You Buy Killarney?, my grandfather would mutter: “If he likes it so much, why doesn’t he go and live there?”

But Joe would still have failed the cricket test: a former hurler for his county, he had no time for cricket but on Sundays would press his ear against the brown Bakelite radio to follow crackly GAA commentaries. Identity, like genetic heritage, is seldom straightforward.

The longer I spend here, the more I love it – the people, the culture, the landscapes

The recent surge in British demand for Irish citizenship is largely a result of Brexit, a way of keeping an EU passport, and this certainly made me speed up an application I always planned to make. In the two years before the referendum, there were 118 British applications for naturalisation; since 2016 there have been 1,197. Many more are applying for citizenship through descent – something I belatedly realised I could have done and saved myself €1,000 (an insult to my Yorkshire ancestors, a breed not known for their love of spending). Had I taken that route, though, I would have missed the celebration at the Convention Centre; the communal sense, in the words of Minister for Justice Charlie Flanagan, of becoming “members of the Irish family”. It felt all the sweeter having been delayed for six weeks by Storm Ophelia.

In truth, it was official confirmation of what I already felt. The longer I spend here, the more I love it – the people, the culture, the landscapes. Belonging is not something that is conferred by a Minister, your DNA or the symbol on the front of your passport. It doesn’t happen in a moment. Whoever your ancestors may have been, whichever cricket team you support, it’s that sense of arriving back at Dublin Airport and taking a moment to realise that this feels like coming home, 100 per cent.

1 ‘He was some man’: Shane’s journey from care child to fearless activist
2 Mary Lou has to call for the smelling salts as SF councillor deals a knock-out blow
3 Chris Hadfield on the climate crisis: ‘The world has seen much, much worse’
4 Fine Gael deletes spoof election video after negative response
5 Netflix: The best 101 films to watch right now
Real news has value SUBSCRIBE