Why Donald Trump supporters in Midwest are feeling happy

One late convert to Trumpism says: ‘He drives me nuts but he’s growing on me’ 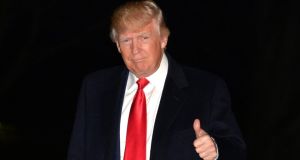 US president Donald Trump appears to be doing exactly what middle America elected him to do. Photograph: Mike Theiler/EPA

It is more than 100 days since Donald Trump was elected president of the US. Would he win again, if the vote were held today?

Many in the US, not to mention the world, are tempted to say: no way. They think all reasonable people must surely be fed up with him by now, after three months of tweets mostly unbecoming of the presidency, scandals over everything from Russia to the Nordstrom department store and an immigration crackdown that has left even legal migrants fearing granny may be next for the deportation bus.

Don’t count on it. In the Midwest American heartland that ushered in this unpredictable era of American history by electing him, the silent white majority appears to be keener on Trump than ever.

The other side may be turning out in their hundreds of thousands, clad in cat-eared Pussy Hats to fight the new world order, but the Trump side can’t believe its luck. And it is scoring more converts all the time.

Victory is a potent recruitment tool and so is delivering on stump promises. President Trump appears to be doing exactly what middle America elected him to do: fight for native whites, and against illegals of darker hue; save jobs in the US, though not quite so many as he claims; and bring the voice of the forgotten middle to the elitist coasts, where it has not been heard for decades.

Charlene from Kenosha county is thrilled – and she didn’t even vote for Trump. Battling the deep grey cold of a Wisconsin winter with a neon-fuchsia parka and the native warmth and hospitality of the Midwest, she’s happy to chat about the man she didn’t choose for president (though not happy to give her surname). She says she’s been pleasantly surprised by him: “I didn’t vote for him but I think he’s better than expected.”

Trump won this southern Wisconsin county, one of a handful of Midwest counties that gave him victory in November’s election, by 238 votes and became the first Republican to do so since 1972.

Mike Ottelien (46), a painting contractor from neighbouring Racine county, says he was “never a Trumper”. But he had an election-booth conversion. “He drives me nuts but he’s growing on me,” says Ottelien, a life-long Republican. “Is there a side of him I will always be leery of? Hell yeah. The Twitter side,” he says, his face freckled by paint splatter.

He particularly applauds Trump’s battle with political correctness, one of the cultural developments of the past 30 years that many Midwestern whites like the least. “Trump has no filters,” says Ottelien admiringly. “Is that becoming of a president? Maybe not, but I respect it.”

Erin Decker (40), a small-business owner and chairwoman of Kenosha county’s Republican party, is yet another late convert to Trumpism. She voted for Ted Cruz in the Republican primary election. Why? “Because he wasn’t Trump,” she says. “I had a misconception of him from the media,” she says, politely echoing the accusations hurled with more vitriol by Trump against the US press.

Like every other Trump supporter I have met in this bit of the American rust belt, she isn’t blind to Trump’s personality flaws: his lack of impulse control, his narcissism and the thin skin so visible in his tweets.

Decker would not want her children tweeting like that but she comforts herself that the personality of the tweeter-in-chief is not the same as that of the commander-in-chief, a man who never fails to impress in person, she says.

What about his recent claim that the media doesn’t cover terrorist attacks? Decker says that isn’t as absurd as it sounds: “The press doesn’t cover who perpetrated the attacks, it doesn’t cover their links to radical Islamic immigrants. That’s what he meant.”

Before all other sources of truth in modern America, she and other Trump supporters believe what their president says first.

And thus the man who could not win has become the man who can do no wrong, at least in the eyes of large swaths of middle America. Trump knows his base and he knows how to keep it happy. Don’t count on him forgetting that anytime soon, how ever the world may sneer at the way he does it.