Gap between main parties could grow under Varadkar leadership 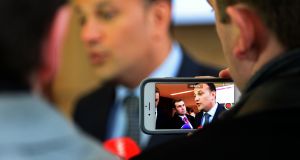 Leo Varadkar: “The success of a Varadkar-led Fine Gael is not just dependent on the policies he proposes but also on his ability to carry his message.” Photograph: Eric Luke

Political leaders such as Margaret Thatcher, Tony Blair, Jeremy Corbyn and Donald Trump not only redefined what their party stood for but redrew the lines of political competition in their countries.

A Leo Varadkar leadership of Fine Gael potentially presents a similar realignment of the Irish political system in a way that none of the other declared or potential candidates at this point appears to offer.

For a long time there has been a casual disregard of ideological differences between supporters of Fianna Fáil and Fine Gael. However, a fissure has emerged between the two camps that might widen considerably with a Varadkar leadership.

Writing a chapter on ideology in Irish voting behaviour in the latest instalment of The Irish Voter, Jos Elkink and I have been able to characterise this emerging fissure between the two camps.

Fianna Fáil’s revival in 2016 was predominantly in rural towns that had been left behind. Voters in 2016 responded to significant differences between the Dublin recovery and the recovery of the rest of the country. The party’s support increased in Dublin by 3 per cent compared with 8 per cent in all other parts of the country.

While the two tribes are inseparable in respect of perceptions of left and right, small differences emerge along elitist-populist or global- local dimension, similar to the US and UK.

election surveys by Red C and B&A show that Fianna Fáil supporters are less likely to have a third-level education. They are also older, significantly more working class, and more likely to live in a rural town. Most intriguingly, clear ideological differences emerge when voters are also asked for the probability that they would vote for either of the two parties.

In his words, the future of Fine Gael is “Liberalism, globalism, equality of opportunity, enterprise and greater personal liberty and responsibility” (Sunday Independent, February 12th).

This classical liberal philosophy is diametrically opposed to what Fianna Fáil advocates under Micheál Martin. Varadkar laments this social democratic approach as being defined by higher taxes, more government, more spending, government intervention and leaning towards policies of nationalism and protectionism.

This is reinforced by recent evidence from the December Ireland Thinks poll, which showed that a Leo Varadkar leadership increases support for Fine Gael by 7 per cent. In this scenario, large numbers of younger, middle-class, university-educated voters switch allegiance from Fianna Fáil, with the party losing roughly a quarter of its under-40 voters in direct transfers to Fine Gael.

Most pertinent, though, Fianna Fáil also loses its liberal wing. We estimate their appetite for classical liberalism by asking whether a respondent agrees with the statement: “People should be free to do as they wish.”

Liberals were more likely to switch: 59 per cent of the Fianna Fáil to Fine Gael switchers agreed with this statement, against 38 per cent of those who remained with Fianna Fáil. This is also directly related to leadership as, perhaps unenthused by Enda Kenny, “leadership” was the most common basis of a switcher’s initial preference for Fianna Fáil.

In recent weeks, Fianna Fáil has somewhat inoculated itself from the advances of a Varadkar-led Fine Gael through the increased prominence of Jim O’Callaghan and the acquisition of Stephen Donnelly.

The success of a Varadkar-led Fine Gael is not just dependent on the policies he proposes but also on his ability to carry his message. And while O’Callaghan and Donnelly may not share the political aims of Varadkar, crucially they connect with the same voters. In my experience in the UK, this was a major issue in Ed Miliband’s attempts to win over working-class voters with restrictive immigration policies. While the policy appealed to voters, the message carrier was incapable of doing so.

The one remaining aspect of this is where it leaves Sinn Féin. It is strategically sensible for Fianna Fáil to amplify its elite views, given that its primary opposition to leading the next government is Fine Gael. However, this leaves an opening for Sinn Féin, which is left with a free run to appeal to working-class voters – those “losers” of globalisation.

Kevin Cunningham is a lecturer in statistics, a pollster with Ireland Thinks and former strategist for the British Labour Party.