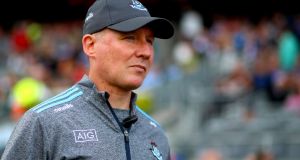 It is hard to recognise the landscape into which Jim Gavin walked as Dublin football manager just over seven years ago. The county had managed only one All-Ireland title in the previous 18 championships. Optimism flickered because of the emergence of young talented players, many of whom he had helped to develop at under-21 level, and his successful record at that grade. Few though would have forecast a transformation of fortunes to the point where the Holy Grail of GAA ambition – five successive All-Irelands – would be fulfilled.

In his tenure he guided Dublin through 21 major campaigns – for league, Leinster championship and All-Ireland honours – and last September captured the 18th of those available titles. Dublin did this with a style that tilted football away from overly defensive systems and which evolved in line with Gavin’s considerable tactical acuity.

Dublin has always been a challenge for the GAA: the capital city is a cockpit of competition with other sports, many of whose international profiles make the pursuit of young hearts and minds especially difficult. A successful county team plays a big role in promoting the games amongst schools and communities which, in Dublin’s case, have been assiduously cultivated via investment in coaching and development.

So great is the success in a broader context – the GAA’s firmest footprint in the city in 135 years – that some now question the viability of a struture that pitches a population of 1.2 million against ones a tenth of that and smaller. But it would be wrong to try to deny the influence of Jim Gavin, whose exceptional management skills included an unflappability on the line, as befitted a former Air Corps pilot. There was also his extraordinary ability to see beyond simply the most talented younger players and identify those who would become outstanding senior players which, under his direction, they duly did.

He leaves the county buzzing. But it might be as well to wait until the post-Gavin era unfolds before assuming that the current domination of football by Dublin will stretch on indefinitely.