Alice Stopford Green: A forgotten historian of the Irish people

Meetings with Eoin MacNeill, Erskine Childers and Roger Casement were held in her house 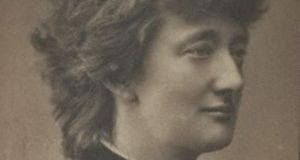 Alice Stopford Green’s three controversial histories, The Making of Ireland and its Undoing (1908), Irish Nationality (1911) and The Old Irish World (1912) became keystones in structuring and re-imagining a national consciousness in preparation for independence. 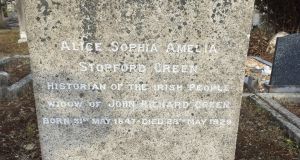 Alice Stopford Green was buried in Deansgrange cemetery on June 1st, 1929. Her granite gravestone remembers her simply as “Historian of the Irish People”. Photograph: Frank Gogan

Despite the retrieval of women into Ireland’s historical narrative, Alice Stopford Green remains a little-known figure. The seventh child of Edward and Anne Stopford, she was born in the archdeaconry in Kells, Co. Meath in Black ’47.

The only biography of her life, A Passionate Historian, by TCD’s RB McDowell, captured some of her essence with plenty of faint praise. But he left much out and made little of her talents.

After the death of her father, who had played a critical part in the disestablishment of the church, Alice Stopford went to live in England. Through her cousin Stopford Augustus Brooke, she met the historian John Richard “Jack” Green, author of the bestseller A Short History of the English People (1874). They married in 1877.

Alice gained an apprenticeship as a historian, working as her husband’s research assistant, travel companion and, increasingly, as his nurse. Jack died of TB in Menton in the south of France in 1883. Alice cared for him tenderly to the end.

Still in her 30s, she reinvented herself as a late Victorian New Woman. Her histories of Henry II (1888) and Town Life in the Fifteenth Century (1894) gained her membership of the Royal Historical Society.

She formed close creative friendships with other leading intellectual women of her day including the social reformer, Beatrice Webb and the Florence-based aesthete and polymath, Vernon Lee. In 1893 she hired a theatre in London’s West End and produced a medley of Ibsen plays with the American actor, Elizabeth Robins.

Her three controversial histories, The Making of Ireland and its Undoing (1908), Irish Nationality (1911) and The Old Irish World (1912) became keystones in structuring and re-imagining a national consciousness in preparation for independence. The Ireland she described was united, at peace and culturally connected to Europe, rather than enslaved to the British empire. Her work provoked a fierce reaction from the academic history establishment in both Britain and Ireland.

In May 1913, with a group of like-minded, moderate Home Rule nationalists, she conspired to run guns into Howth and Kilcoole. As treasurer of the committee, she personally loaned around half of the money to buy the weaponry. Meetings with her co-conspirators, Eoin MacNeill, Erskine Childers, Mary Spring Rice, Roger Casement and Darrell Figgis were held in her drawing room overlooking the Thames embankment.

She served as first woman president of Britain’s Historical Association from 1915-18 and her pen was turned towards producing essays and articles trying to heal the escalating divisions in Irish society.

After the Easter Rising, she relocated to Dublin. Her new home at 90 St Stephen’s Green hosted many revolutionary discussions and was regularly raided by auxiliaries. A supporter of the Irish treaty and co-founder of Cumann na Saoirse, she was elected to the Seanad Éireann along with Nancy Wyse Power, Ellen Cuffe and Eileen Costello.

In 1924 she commissioned jewellery-maker Mia Cranwill to make the Senate Casket, a masterpiece of Irish art and design. In her dedication, read out to her fellow senators, Stopford Green reflected: “No real history of Ireland has yet been written. When the true story is finally worked out – one not wholly occupied with the many and insatiable plunderers – it will give us a noble and reconciling vision of Irish nationality.”

The casket, now in the care of the Royal Irish Academy, contains an illuminated scroll of the signatures of all those who sat in the first Seanad.

Alice Stopford Green was buried in Deansgrange cemetery on June 1st, 1929. Her granite gravestone remembers her simply as “Historian of the Irish People”.

A memorial plaque to her will be unveiled, at the initiative of the Meath Archaeological and Historical Society, in her native Kells by Meath TD and Minister of State Helen McEntee on Saturday, December 7th.