Euthanasia is sometimes the right choice

Ireland should urgently legislate for assisted suicide. It is the humane thing to do 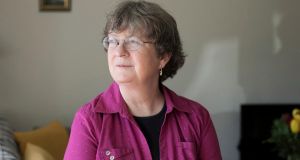 Adrienne Cullen’s extraordinary tenacity led to the introduction in the Netherlands of open disclosure protocols in all major hospitals.

There are many hard choices to be made in life, especially if like Vicky Phelan and the 221+ women caught up in the CervicalCheck scandal you are fighting the odds for every extra day. Even then, there is no harder choice than embracing euthanasia.

That’s why it struck a chord recently to see Vicky call for the legalisation of assisted suicide in Ireland and declare it an option she might want to consider, depending on the progress of her cancer. It was a view I recognised – borne of a terrible practicality.

It struck a chord for three reasons: because it always takes courage to say what nobody wants to hear; because there’s nobody better qualified to open this debate in Ireland than Vicky; and because my own wife, Adrienne Cullen, chose euthanasia in not dissimilar circumstances a year ago.

Adrienne was 58 when she died quietly by euthanasia at the Netherlands Cancer Institute in Amsterdam at 10.15am on New Year’s Eve 2018. Because she couldn’t take opioid-based painkillers, her options were severely limited. Her pain had become uncontrollable and was going to get worse.

After six years of constant debilitating struggle, she was not going to see 2019, nor could she face it. Medicine had nothing more to offer, except a way out. And that way out – euthanasia or assisted suicide – has been legal in the Netherlands, in tightly controlled circumstances, since 2002.

Adrienne was left with terminal cervical cancer after one of the country’s largest university hospitals – UMC Utrecht – failed catastrophically not once but twice.

It “lost” test results showing she had cervical cancer, and then – quite remarkably – also misread a separate Pap smear showing the very same thing.

Although she did everything possible to avoid the day, Adrienne knew she was dying.

It was that unavoidable, in-your-face, 24-hour-a-day knowledge that motivated her to take on the hospital that harmed her and then did its upmost to “set her adrift”, the words of a leading expert on medical error – now the world’s third-largest cause of death, after cancer and heart disease.

Adrienne forced the hospital to pay a record settlement, the highest ever in the Netherlands though pitiably small in comparison with Ireland or the UK. She forced a written apology, the first ever from the chief executive of a Dutch hospital to a patient it had harmed.

She delivered the first in a series of annual public lectures named after her, at which – in front of an audience that included the Irish ambassador, Kevin Kelly, the director-general of the Dutch Health Inspectorate, Ronnie van Diemen, and the chief executive of UMC Utrecht, Prof Margriet Schneider – she detailed the gagging clause the hospital pressured us both to sign and that she turned her back on.

Most importantly of all, her extraordinary tenacity led to the introduction in the Netherlands of internationally recognised “open disclosure” protocols in all major hospitals – setting out exactly what hospitals must do in cases where patients have been harmed.

The point about all this is not just to list Adrienne’s achievements, impressive though they are in a few short years, in country not her own, and facing certain death.

The point is that she could never have faced those battles without knowing that euthanasia was there in the background as an escape hatch. That’s what she called it: “My escape hatch.”

That’s why I used the word “embrace” in relation to euthanasia in the first sentence of this piece. Adrienne embraced it without reservation as a means of carrying on stronger and more determined than ever. I supported her in that. And I have absolutely the same sense about Vicky.

Adrienne and Vicky were in regular touch in the year before Adrienne’s death. I contacted Vicky the other day to make sure her views on euthanasia are as reported. They are, without equivocation.

Like Adrienne, she has thought long and hard about her beautiful family and about managing her circumstances as best she can, for as long as she can.

“It takes a brave person to choose euthanasia, to understand why you are choosing it, and to stick to it as the best option when the time comes... and, as you know better than anyone, Adrienne was that brave person,” Vicky responded with typical generosity.

There is bureaucracy, of course, a lot of it, and that’s a good thing: psychological assessments, medical assessments, and finally, the obligatory agreement of two doctors independently of one another that the time has come.

My job that morning was not to lose my nerve, not to let Adrienne down. We were lucky in that we had the support of a Dutch friend who was there for both of us and for whose strength I will be eternally grateful. I held one of Adrienne’s hands. She – our friend – held the other.

It won’t surprise you then when I say that Ireland should legislate to legalise euthanasia, as a matter of urgency. It is the humane thing to do. It is the right thing to do. And our legislators should be guided by Vicky Phelan and women like her. It is the very least they can expect.

Peter Cluskey writes for The Irish Times from The Netherlands

1 ‘He was some man’: Shane’s journey from care child to fearless activist
2 Mary Lou has to call for the smelling salts as SF councillor deals a knock-out blow
3 Chris Hadfield on the climate crisis: ‘The world has seen much, much worse’
4 Fine Gael deletes spoof election video after negative response
5 Paul Flynn: Three of my family’s favourite dinners
Real news has value SUBSCRIBE