All fur one – An Irishwoman’s Diary on cats 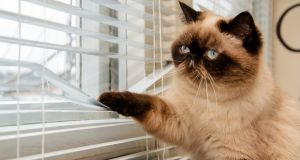 “Cats played along, watching and waiting until they managed to turn the tables and domesticate us.” Photograph: iStock

I’m guessing it’s a she because I’ve asked a cat person about identifying this from a distance and was told that you’d absolutely know it was a Tom by its sheer size.

I think this person overestimates my ability to rate cat size but the cat comes and goes and as often as not will spot me spotting her and a staring contest will ensue.

I find these contests to be very unnerving as I’m pretty sure that locking eyes with a feline means some kind of challenge has been issued. And so I am always the first to throw in the towel, finding something of immense interest right there at my feet.

As a species, we’ve done a lot of stupid things but attempting to domesticate cats has to be high up on that list.

Flushed by the success of cajoling those wolves to the campfire, and over the millenia morphing them into labradoodles and cockapoos and the like, someone somewhere decided that cats were the next big project.

And what a failure this project has been.

Cats, of course, played along, watching and waiting until they managed to turn the tables and domesticate us.

We’re the ones who are now feeding them and looking after them and providing them with a warm, comfortable environment while building cat-flaps and opening doors and windows to facilitate their meanderings all over the place.

And what do we get in return? Nothing. They don’t herd sheep.

Whisper it, please, but we need to throw off our shackles. We need to be set free.

But we’ve got to be careful here. If our overlords get wind of this, god knows what will happen.

Years ago now, I lived in Japan and for a while lodged in a very generous woman’s house in a suburb of Tokyo. Kimyo had a cat, Kurochan. “Kuro” means black and “chan” is a term of affection so if you felt so inclined, the name could be roughly translated as what-a-cute-little-black-thing-you-are.

If you felt so inclined.

Kurochan and I sized each other up on day one and came to a silent agreement to keep out of each other’s way. I like to think that I kept my side of the bargain but Kurochan quickly lost interest in the whole thing and within a few weeks wanted me gone.

I know this because he told me so.

I slept on a futon on the floor of a traditional Japanese room. This room had a sliding, screen door which had no lock. You simply pulled it open and shut.

One night I woke up suddenly and breathlessly to find Kurochan meowing in my face. He had scraped open the screen door, padded over to my futon and let it all out.

Once I had peeled myself off the ceiling, I opened another door in the room which led into the garden and shoved him out.

My friend was somewhat perplexed at breakfast. She had discovered the cat in the garden when she got up that morning.

How could this be?

I said nothing but in subsequent weeks redoubled my efforts to find my own place and as soon as was feasibly possible got myself out of there.

This has to end. A stand needs to be made and a joint stand at that.

Nobody wins unless everybody wins, as no less an eminence than Bruce Springsteen has argued, and there’s no way he’d have a cat.

So we’re in this together. Obviously, when I say “we” I’m ignoring those people who go on and on about how warm and affectionate these cats are. So warm! So affectionate!

A colleague knows someone with a cat. The cat lives some of the time in the hot press. You open the door and there it is.

These people are a lost cause. We need to cast them off.

Meanwhile the rest of us can get down to the business of reasserting control.

But quietly does it. They’re out there stretching, stalking, slinking from place to place.

Our time will come. Like that shot that was heard around the world, sooner than you think a cat in a garden somewhere will look up and stare and the recipient of that stare will stare right back.

Right back at them.