Una Mullally: US faces greater threat than Trump if its leaders remain in denial 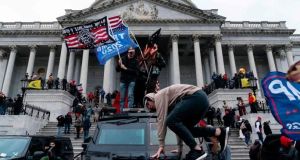 Trump is always showering love on his followers, and in turn, they love him, hence the dominance of Trump flags over American flags in the DC crowd. Photograph: Alex Edelman/AFP via Getty Images

The internet is leaking. That’s certainly what the attempted American insurrection in Washington DC looked like last week. It was as if there was a rip in the real world and the fringes of the Trump cult online ecosystem started to spill out, pixelated on the Capitol Building steps.

Here were social media avatars come to life, like in a live action film when all of a sudden the cartoons arrive, looking out of place, yet somehow here, in the world. It was also a moment when we could really see what internet-bred American fascism looks like – a freakish rage-filled Comic-Con.

There is good reason to see the Trump cult as something rooted in hate, and that’s certainly its primary fuel, especially given how racism is so central to the ecosystem. But it’s also about warped declarations of love

The performative, theatrical, and obviously extraordinarily dangerous scenes showed a mob creating content in real life, sensational viral actions that were instantly fed back through the internet, digested as entertainment and processed as a production line of memes.

After the human hashtags roared, smashed and goofed their way into the Capitol Building, the social media platforms responded by muting the troll-in-chief. It’s pathetically late, of course. The construction of alternate realities online within which conspiracy theories bloom and offer a sense of community and cause for one’s own inadequacies, discontent and psychosomatic oppression – where the feelings are real but the oppression is not – is not just this era’s greatest challenge to democracy, but to reality and truth itself. The battle to counter that has been lost in America and elsewhere it has also gone viral, as the presence of far-right conspiracy theorists at demonstrations and protests in multiple jurisdictions, including in Ireland, shows.

One of the keys to all of this is how empathy operates. There is good reason to see the Trump cult as something rooted in hate, and that’s certainly its primary fuel, especially given how racism is so central to the ecosystem. But it’s also about warped declarations of love. That may seem paradoxical, and that’s because it is. The one word Donald Trump uses over and over again to communicate to his followers is “love”. For a person who spews bile and hate all the time, it’s certainly notable.

Even in his videoed speech while the riot was ongoing, he made sure to say “We love you. You’re very special.” This pronouncement seems bizarre to the untrained ear, but it’s not new. Trump is always showering love on his followers, and in turn, they love him, hence the dominance of Trump flags over American flags in the DC crowd. This empathy-bombing solidifies community ties within the ecosystem and, crucially, to him. They love him more than America, obviously, because they were attacking America in the moment. When Donie O’Sullivan was reporting on CNN, standing between police lines and rioters, the rioters were blaring a song over a speaker, All You Need Is Love by the Beatles.

Events that sometimes look and feel spontaneous, are nearly always emerging from a broader ongoing process. America is not at the “end” of anything, besides its tether

We saw this empathy play out among the police too. The idea that DC was not “prepared” for what was going to happen is ridiculous. Of course it was prepared, and this is the outcome it prepared for. Why is such an expression of white lunacy now so exceptional when it’s on the streets and crawling into buildings? It’s been in the White House for four years.

The stark contrast between how the police behaved with these rioters and how they behave towards Black Lives Matter protestors, is about how empathy creates responses that selects those perceived to be in one’s “in-group” and treats them as one would like to be treated, while treating those perceived to be “other” completely differently. The behaviour of the police was not some kind of operational or organisational flaw, it was an empathic response born of personal, structural and institutional racism, and so too is its converse response: police violence towards black people.

While it’s great to see so much heat on social media companies for their role in fostering, ignoring and monetising hate and creating radicalisation pipelines, there is an issue with apportioning all blame to them. Externalising the problem – to Trump, to Facebook – will not effect the change that needs to occur, which is a prolonged period of self-examination among white American people, as to why their rage is such a destructive driver, and how it mixes so dangerously with gullibility and psychosomatic oppression.

But perhaps the most worrying aspect of America’s faltering democracy last week, was Joe Biden’s speech as events were unfolding. Biden maintained that what was happening was not what America is about. That it is not who they are. This is profoundly unhelpful. At what point are American leaders going to move out of the denial phase and enter the acceptance phase? Who does it serve to pretend that the people he was talking about, and their actions, are not American? It happened in America. It was instigated by Americans. It could not have been on a more American stage. If such denials continue, then just as Trump emerged as a political, social, cultural and digital force during the Obama era, an even greater threat, a more sophisticated one, a more insidious force, will emerge during the Biden-Harris era.

The idea that the Trump era crashing to a close is the “end” of something is equally naive. For a country that sells its own mythology back to itself through cinema, there is an obvious temptation to believe that the current events are the credits rolling. But events that sometimes look and feel spontaneous, are nearly always emerging from a broader ongoing process. America is not at the “end” of anything, besides its tether.