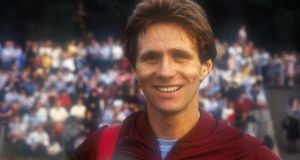 Eamonn Coghlan: among the illustrious list of names on the Donore Harriers Athletic Club’s Waterhouse Shield

Although a revered tradition in Donore Harriers Athletic Club, the Waterhouse Shield event has also been ruining Christmas dinners for as long as anyone there can remember. A 10-mile race, cross-country, it would not be for the faint-heated even at the best of times. But it takes place annually on the morning of December 26th which, if you’re a participant, can have a depressing effect on your enjoyment of the 25th.

For this and other reasons, I have usually limited my involvement to watching it from a safe distance. And as recently as early December, it looked as if I would be saved even the bother of copping out on this occasion, because for the second time ever (and the first since 1916) the race might not happen. Then came a late reprieve. Acknowledging that the event is small, old, and – being a handicap, with staggered starts – naturally distanced, the Phoenix Park authorities assented to a low-key staging.

In the end, as an appreciator of all things historic, I couldn’t not take part in what we hope will be remembered as a unique, Year-of-the-Plague edition. But it made for an unusually sober Christmas Day, in which I had to restrict myself to one, long-drawn-out glass of wine. Well, okay, maybe two. Three at the most if we’re counting Prosecco.

First run in 1896, the event dates from an era when Christmas dinners could still be ruined by rows about the Parnell split, as famously described in James Joyce’s A Portrait of the Artist. And if the race itself doesn’t feature in Joyce’s writings, the shield sponsor does – at least twice – thanks to a landmark feature of his jewellery shop in Dame Street.

Waterhouse’s clock used to be nearly as well-known as the one on Clery’s and played a similar role. Hence a dubious mention in Dubliners, in the ironically titled Two Gallants.  Far-from-gallant, the heroes of the story are discussing their social lives when one, Corley, recalls a recent highlight: “I was going along Dame Street and I spotted a fine tart under Waterhouse’s clock and said good night, you know. So we went for a walk round by the canal […] I […] squeezed her a bit that night. Then next Sunday, man, I met her by appointment . . .”

The clock also turns up, years later, in Finnegans Wake. It’s a more ghostly presence there, in keeping with a book set in an underworld and written in dream language. But at least the race sponsor’s name is spelt correctly, viz: “What age is at? It saon is late. ‘Tis endless now senne eye or anyone last saw Waterhouse’s clogh. They took it asunder, I heard thum sigh. When will they reassemble it?”

That’s from the celebrated “rivers” passage, where Joyce weaves a thousand river names into the text. Hence the “senne”, which runs through Brussels, and the “clogh”, which is the name of streams in Kilkenny, Antrim, and elsewhere.

But as for the clock, clearly, it had stopped working by the time FW was written (1922-39). Nor was this a recent development. When it was taken down a few years later (1943) this paper’s Irishman’s Diarist wrote: “Its most noticeable feature was that it was never known to work within the memory of most present-day Dubliners.”

Getting back to Christmas Day, I can also report that – unlike Corley – I did not partake of any tarts, and I didn’t risk the pudding either.  Not that you’d have known this from my performance next day. I was generously handicapped, or so it had seemed, and even briefly fretted about whether I was worthy to join the illustrious list of names on the shield. These include Eamonn Coghlan (in 1979) and several other Olympians, although in theory anyone can win a handicap– a point most dramatically proven by the late Frank Cahill, who won for the first time in his 70s, after 52 failed attempts.

But I needn’t have worried. From about the third lap on, the black-and-white blurs of faster clubmates were overtaking me with monotonous regularity. Like a late-stage Waterhouse Clock, I was slowing with every circuit, while they were speeding up.  The best thing I can say is that, unlike the clock, I didn’t stop.

In the meantime, among the blurs that passed was one smaller than the others.

He was a human version of one of the park’s deer fauns, skipping lightly over the mud. It didn’t make me feel any less decrepit when I finally fell over the finish line.

But I wasn’t surprised to learn that the latest winner of the ancient race was one James Bolton, making his debut, aged 16.