World view: The ragtag mob storming the US Capitol should be taken deadly seriously 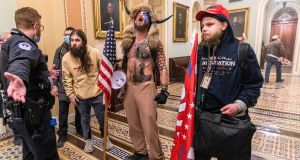 Supporters of US president Donald Trump are confronted by police officers outside the Senate chamber inside the Capitol after storming the building. Photograph: Manuel Balce Ceneta/AP Photo

It was a grimly fitting finale.

How else to draw the curtain on the Trump presidency but with a violent, shambolic and ineptly executed storming of the US Capitol by hundreds of the president’s supporters, most prominent among them a bare-chested loudmouth with what looked like two dead raccoons and some antlers on his head.

If a novelist drafted a closing scene that so neatly encapsulated her themes, it wouldn’t survive the first revision.

But that’s what it was; a four-year spectacle of horror and farce brought to its inexorable, chaotic denouement on live TV, annotated on Twitter – where else? – by a worldwide audience struggling to believe that this was for real.

The underlying reasons for the rise of the far-right are present in Europe just as they are in the US, and democrats underestimate the threat at their peril

Was it for real? The question that greeted Donald Trump’s first, unlikely foray into politics in the late 1990s never quite went away, even as his presidency unfolded as disgracefully as the worst prognoses envisioned it in 2016. Was he serious? Were these really his beliefs? Would the office tame him? It will surprise future historians that such wishful thinking persisted as long as it did.

Salena Zito famously remarked, in The Atlantic in 2016, that, while the press took Trump “literally, but not seriously”, his supporters took him “seriously, but not literally”. If so, it turned out they were both wrong: he was to be taken seriously and literally.

And yet, for many people and for most of his presidency, Trump was a figure of fun, a man to be ridiculed as much as feared. This lurid, preening narcissist, seemingly humourless, radically inarticulate and devoid of human empathy, was a richly comic character.

Laughter can be a powerful, subversive tool – and a satisfying one too, especially when the subject of our ridicule regards being the butt of a joke as the greatest indignity. Inevitably, Trump was a laughing stock. But he was also deadly serious, and so were his most fervent supporters.

That’s not to ascribe any strategic cunning to the man, or even managerial competence – his chronic inability to get things done was the most effective brake on his power.

Two decades ago, it was unthinkable that the far-right would become a major force in France and Germany; today it is a fact of political life

But he did have a consistent view of the world – one that was evident as far back as the 1980s and changed little in the intervening years – and had an intuitive feel for the instincts of his base. When he spoke, they listened. When he raised baseless questions about Barack Obama’s birthplace, he and his supporters knew exactly what he was getting at.

When he described white supremacists in Charlottesville as “very fine people” or whipped up his crowds with denunciations of Latin American “invaders”, nobody was expected to believe he was speaking figuratively. To most people, the idea that Trump could overturn the result of an election that had been “stolen” from last November was a joke. To those who attacked the Capitol on Wednesday, it was deadly serious.

US democracy is more secure than the building that symbolises it, but while the rule of law and the institutions of government have withstood Trump’s four-year assault, the system is damaged nonetheless, and it could take years before the consequences of that damage become clear.

There is a lesson here for other complacent democrats. In the past decade, Europe has been shaken by the rise of parties on the nationalist right. Many of them have proven inept.

In Italy, Denmark, Germany and elsewhere, their electoral success has been followed by internecine fighting, splits and scandals. In many places where they have taken power, they have been exposed and then dumped by voters. The UK, led by another populist showman, made such a mess of leaving the EU that nearly every major far-right party on the continent has since quietly dropped exiting the EU from their policy platforms.

But the underlying reasons for the rise of the far-right – political, economic and technological – are present in Europe just as they are in the US, and democrats underestimate the threat at their peril. David Cameron once dismissed UKIP as a party of “fruitcakes, loonies and closet racists”; that was 10 years before the Brexit referendum.

Two decades ago, it was unthinkable that the far-right would become a major force in France and Germany; today it is a fact of political life. In Poland and Hungary, democratic norms are being steadily eroded by ruling parties that openly repudiate the liberal values of the European Union.

Donald Trump turned out to be no more capable a leader than anyone expected in 2016. Rejected by the voters, he is about to become a one-term president. But the forces he unleashed will not be so easily contained. Events at the Capitol this week were the deaths throes of a rotten regime. The question is whether they mark the birth pangs of something even worse.