Denis McShane: Get ready for the Brexiternity 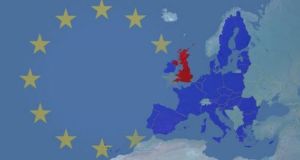 The self-satisfied smiles of Irish friends as they contemplate the trouble London elites are in over Brexit are shortsighted as the offshore western islands of Europe are all part of a common whole, and if England or Britain loses so too will Ireland. Photograph: Getty Images

I do not have a drop of English blood in me, but feel more English than anything else. My father was Polish. He took a bullet in his shoulder leading his men in battle defending Poland as a newly-commissioned officer against an invading nationalist army in September 1939. He arrived with other Polish soldiers in Scotland in the summer of 1940.

The dashing Poles, who kissed the hands of every woman they met, were devout Catholics, so the Irish mothers of Lanarkshire thought their virgin daughters were safe with the testosterone-charged Polish warriors. I was the result.

Born in Glasgow of mixed Polish-Irish-Scottish blood, I was brought up a Londoner on the stories of my father, who died when I was 10, about the terrible things the Russians did to Poles or stories from my mother on what the Brits did to the Irish. My Donegal grandmother and her daughter, my mother, filled me with every story about British brutality in Ireland from the Famine to the Black and Tans.

Can it ever end? As Ireland’s President, Michael D Higgins, noted recently the dangers of a new smug Anglophobia promoted by the identity nationalist ideology of Sinn Féin is gaining ground as many in Ireland enjoy the difficulties Brexit is causing England.

Scotland is on a hazy glide-path to separatism as Scots who voted two-to-one to remain linked to Europe resent bitterly that a narrow cabal of English ideologues, first headed by Nigel Farage and then absorbed into mainstream English rightist politics, propose to deny Scots their European identity.

Brexit will not finish on December 31st. I first used the word Brexit in 2012, and I have now coined a follow-up term – “Brexiternity” – as the question of Europe will last for the English for decades just as the “Irish question” – an expression first used by Disraeli in the Commons in 1844 – took a century or more to be answered and perhaps is not even fully answered today.

President Higgins said that “Irish people, the subject of stereotyping for so long, should not stereotype British people because a majority of Irish people disagree with Brexit”.

There is, indeed, a sense of schadenfreude visible in the self-satisfied smiles on the faces of Irish friends as they contemplate the trouble London elites are in over Brexit. This is shortsighted as the offshore western islands of Europe are all part of a common whole, and if England or Britain loses so too will Ireland.

I feel at times Scottish, or Irish, or even a bit Polish, and have lived and worked in different countries. Yet however I twist and turn I remain a Londoner, and more than that in the poet’s words “a body of England’s, breathing English air”.

A middle-class English Benedictine education, playing Henry V in a school play, Oxford to study English history, the BBC as a graduate trainee, in due course the House of Commons, the foreign office as a minister, the Privy Council kneeling to swear loyalty and allegiance to her majesty, a life of reading English novels, history and poems. In every sense England made and makes me.

Yet today I have a passport of a foreign republic, that of Ireland. Thanks to my granny’s birth in Co Donegal I am eligible for Irish citizenship. Ireland was where summer holidays as a boy were passed close to where the river Boyne runs into the sea, where an uncle, himself a teenage veteran of the fighting after 1920, and his Scottish-Irish wife, my aunt, lived in Drogheda.

Of course to be formed by English literature is to be formed by the great Irishmen and women who have written the best English ever from Swift to Wilde to Yeats to Seamus Heaney and Edna O’Brien.

But now I am deeply grateful to Ireland for allowing me to keep the rights that Britain wants to remove.

Most democratic progress is about the extension of rights enjoyed by individuals to lead their own lives, enrich themselves, and be secure in the knowledge that their rights are inalienable once legislated.

Now for the first time in my life we have a government in London that seeks to reduce the rights free Englishmen and women have enjoyed, namely to travel, live, work, or retire in other countries on the continent.

Our old Commonwealth friends like Canada and Australia do not give us these rights, but France and Spain and Italy and Greece and other EU member states do.

I know full well the problem of freedom of movement which for some inexplicable reason successive UK governments have refused to regulate or manage as other EU member states do fully within EU treaty obligations.

Luckily my children had the good sense to be born to a French mother so will have no problems with their French ID cards as well as British passports in travelling or living anywhere in Europe. Now I can join then.

I am grateful to Ireland for making this possible. But I would have preferred to live until I die in a United Kingdom which extends rather than reduces the rights of its people.

And being welcomed as an Irish citizen so late in my life only reinforces my determination to fight against the rise of nationalist identity ideology which has returned with a vengeance as the new virus threatening democratic politics everywhere.

Denis MacShane is a former UK minister of Europe.