The Irish Times view on the economy in 2020: hoping for a swift rebound

A huge rebuilding job awaits after a devastating year 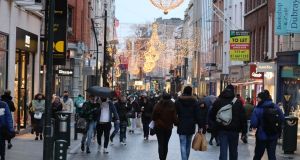 The decision to use significant State supports to combat the economic impact of the epidemic was undoubtedly the correct one. Photograph: Collins Photo Agency

At the end of a turbulent year for the economy, some of the sectors worst-affected by the pandemic are again closed and it is clear that State supports for businesses and for people out of work will need to continue for some time. Many businesses have been closed or heavily restricted for a third time and significant long-term damage in some sectors is now inevitable. A huge rebuilding job awaits.

Two pieces of positive news late in the year lifted the outlook. The first was the appearance of vaccines for Covid-19. The second was the signing of a Brexit future-relationship deal between the EU and UK. Brexit still brings economic costs and threats, but had there been no deal this would have been a lot worse. It would have hit jobs and growth and put further heavy pressure on the exchequer from the need for further Government support well above what will be needed now.

We saw during 2020 how in times of major emergency the State’s role can be vital. The decision to use significant State supports to combat the economic impact of the epidemic was undoubtedly the correct one. There was some leeway in the exchequer finances, partly due to the decision of Minister for Finance Paschal Donohoe in October 2019 to introduce a 2020 budget based on the assumption of a no-deal Brexit.

A key factor has been the support by the European Central Bank in the markets, which has held down interest rates, meaning the State can borrow at low – or in some cases negative – interest rates. Unlike the previous financial crisis, there was no need to hike taxes and cut spending and thus intensify the economic hit. So what we have seen, here and across the world, has been an extraordinary exercise in counter-cyclical budget policy, fuelled by cheap money.

Despite the hit to the economy, Gross Domestic Product (GDP) – the traditional measure of economic output – looks set to rise this year in Ireland. This is a poor indicator, as it fails to capture the massive hit to the domestic economy and to consumer spending, which endured record falls. However the parts of the economy which could continue to operate did better than anticipated, giving vital support to employment and tax revenues. As a result, the deficit for the year will be well below the worst fears, giving more scope to continue the economic rescue mission in 2021.

The early months of next year look difficult, as the rise in virus numbers have led to restrictions being tightened, possibly for a prolonged period. This provides huge challenges for many businesses – even with State assistance, closures and rising unemployment look certain. Heavy State spending will have to continue. Support will also be needed for sectors worst affected by the UK’s departure from the EU trading regime, notably fisheries.

The arrival of vaccines provides hope, of course. It is unclear how quickly this will allow restrictions to ease, but the pace of delivery of the vaccines will be a key factor in 2021. To state the obvious, investment in getting this right and resourcing it would pay off many times over not only because of the public-health impact but also the scope to ease restrictions earlier and more comprehensively.

In economic terms, the early months of 2021 could feel like 2020, before a rebound as a gradual reopening becomes possible. Given the extent of the savings in the bank accounts of those whose incomes have not been heavily-affected, there is scope for a significant rebound in consumer spending. As 2021 goes on, the possibilities should gradually, but steadily improve.

A significant task of rebuilding then awaits. And there will be choices to be made. In April the Government will publish a medium-term plan for the public finances. The likelihood of interest rates remaining low for a prolonged period gives scope, but the scale of spending increases planned – both related to Covid-19 and other issues – is very substantial. Choices will be needed in terms of where resources are directed and how this will be funded, particularly as a bigger role for the State looks likely, both as a fall-out from the pandemic and due to pressures in other areas such as housing.

The extent of the Covid-19 crisis also makes other changes likely. Work will change for many. There will be demands for longer-term supports in areas like sick-pay and supports for companies hit by sudden shocks. There will be demands that the health service be better equipped and resourced, on a permanent basis. And that lower-paid staff in vital jobs – in shops, hospitals and so on – get a better deal. There are many questions to be addressed about the future of planning, of city centres and of public transport.

Sustainability must be the goal, both in the sense of the environment and people’s lifestyles – many, for example, previously blighted by long commutes. The economic future, post-Covid, is still hard to assess as we remain in the middle of the battle against the virus. But it is time to do so, because if we don’t we risk missing some of the opportunities ahead.