Pandemic too good an opportunity for secularists to pass up 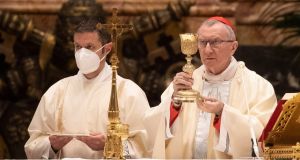 The Catholic Church has a 2,000-year history of people risking everything for their belief in Christ: the first day after Christmas recalls the first Christian martyr, Stephen. All the apostles except John were martyred. The word “martyr” means “witness”, and this kind of witness – willingness to face torture and death – is heroism of a kind we rarely see in this country nowadays.

It was not always thus. In his remarkable book Our Martyrs, Fr Dennis Murphy catalogues the almost unbelievable cruelty endured by heroic Irish men and women, many priests and bishops, including St Oliver Plunkett, under the Penal Laws from 1535 to 1691. These witnesses suffered hanging, quartering, burning, dismemberment, beheading and stoning. Their remains were often desecrated. These were the consequences of speaking truth to power in a bloody and brutal time.

The world often turns its back on people like this, and regards their belief as a form of madness. Yet the martyrs exhibited a crystal-clear kind of sanity when faced with threats to freedom of conscience. These witnesses concentrated their minds and focused on what is important in life, even to the point of death.

For years, an aggressively secular culture has proposed that religious practice and expression be confined to the private sphere – hence the push to remove religion from schools and to suppress religious voices in the public square. The pandemic has provided an opportunity too good to miss. Those who do not themselves profess any religious belief now tell those who do that God is “everywhere”. So He is. However, it is a theological non sequitur – not to mention deeply condescending – to say that there is no need to go to church or worship publicly.

On December 30th, the Government once again made it a penal offence to leave one’s house to attend Mass or confession or avail of other sacraments. Last November, as reported in this paper, a priest was threatened by gardaí with prosecution, a fine and imprisonment for saying Mass in his church with others in attendance. Not since the penal era has the law of the land criminalised priests for celebrating a public Mass.

Denied access to the sacraments, Catholics can, however, avail of “essential” services, such as buying vodka, doing the dry cleaning or popping out to the bike shop. Under the regulations, universities, schools and creches can remain open. Earlier this year, the deputy chief medical officer said simply that, in the context of a pandemic, public worship was considered “less important”.

The Constitution suggests otherwise. The right to the free and public profession of religion is expressly guaranteed. No Catholic would argue that any right is unlimited. However, infringements on religious freedoms must be anxiously scrutinised and carefully justified. No restriction should go further than is absolutely necessary. At present, the practice of religion is effectively criminalised, but so far no justification has been offered.

The Government might argue that churches are places where the virus is widely transmitted. But on its own figures, there is little or no evidence to suggest this. Religious services of all denominations and other ceremonies (whatever that means) account for a tiny proportion of cases.

The Government might argue – as we were told earlier this year – that lockdowns are necessary to ensure adequate hospital capacity for treating people with Covid-19. But at no time this year have the hospitals been overwhelmed. At the time of the coming into force of the new Level 5 restrictions, there were 623 beds available in the public hospital system.

We are now told that confirmed cases are rising sharply. However, it is striking that, having had many months to prepare for the winter season and with much experience treating Covid-19 patients, and a known historical undercapacity, by September (according to the Department of Health’s Open Beds report), only 78 inpatient beds had been added to the December 2019 national total of 10,919. It was not until December 18th that the Minister for Health announced that more critical-care beds would be made available in a multi-year plan. A government more concerned about capacity in the system might have been expected to do more on the supply side of the equation, and to have done it more quickly.

The Government’s stated aim is to protect life. Yet its methods have been costly and the trade-offs cannot be ignored. Many have lost their jobs, businesses and livelihoods. All have been prevented from social interaction; a year out of the life of a young person or someone hoping to meet a future spouse and start a family is a long time, particularly for young women.

Some have witnessed the rapid deterioration of the mobility, fitness and mental acuity of elderly relatives brought about by a cycle of lockdowns and isolation. Others have been prevented from attending their own parent’s funeral. Although Central Statistics Office figures show that overall deaths are down on last year, many people now live in real terror of the virus. Some who were in any event approaching their final days due to other conditions or old age have spent those days in fear of the virus, alone and regarding friends and family with suspicion. Those who are Catholic may have done so without even the solace of the sacraments.

Churches have made extraordinary efforts to protect those attending for public worship. Many church buildings are immense, with the capacity to observe strict social-distancing protocols. A typical mass is of 20 to 40 minutes’ duration – comparable to many visits to “essential” retailers, whose aisles are less able to facilitate effective separation. The Government has offered no evidence that Masses have contributed significantly to the spread of the virus. It has simply decided that public worship is not sufficiently important to qualify as “essential”.

Our ancestors would disagree.