Talk of academic prowess and athletic skill, while distancing past self, are classic tactics 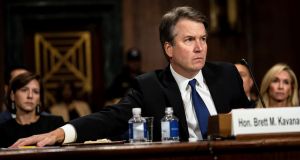 If a group of writers sat in room for a year trying to concoct a theatre of male anger, they could never have scripted the Senate hearing of Brett Kavanaugh last week. Their script would be seen as too on the nose, too cliched, too outrageous.

Yet this contemporary theatre drawn along gender lines, where a victim of sexual assault is forced into calmness despite her being the one who suffered the trauma, and where the alleged assaulter assumes the stance of aggression and hysteria, is instructive in how it illustrates many of the tricks and tropes of male rage.

9 Covid-19: Lockdown to be extended until late February as ramping up of vaccines promised

10 Cold and working from home? How to stay warm without whacking up the heating

11 Can five minutes’ exercise a day make you fit?

18 The lockdown may squash the virus but what will it mean for Ireland's economy?

20 Mandatory travel quarantine should be introduced by Ireland, experts urge

21 Covid-19: Mandatory quarantine for passengers is not workable, Tánaiste says

22 Temperatures set to plunge to -4 degrees, bringing risk of snow

23 ‘An inspiration’: Young poet Amanda Gorman and her words capture the moment at Biden inauguration

24 How to use up your Covid pantry ingredients imaginatively

25 Smart Victorian upgrade a stroll from Dalkey village for €1.595m

26 Every adult in Ireland to have Covid-19 vaccine by September, Minister for Health says

27 Hurling between the high rise flats: My first glimpse of the emigrant life

39 The Irishman with big hopes making tiny houses in Berlin