Una Mullally: Hozier is truly the bard of the risen people 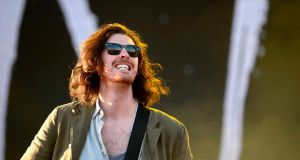 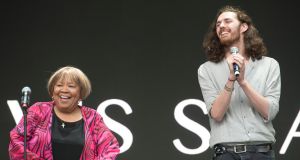 Hozier and Mavis Staples on the main stage at this year’s Electric Picnic. Photograph: Dave Meehan

“It’s not the waking, it’s the rising.” This is the line with which Hozier announced his return last week with the song and EP Nina Cried Power. The song itself is epic and described by Hozier as crediting both the legacy and the result of protest .

“There is absolutely no rock and roll without blues music,” Hozier told Billboard. “There is no blues music without one of the most horrendous atrocities of human trafficking in the last few centuries. It is, of course, a really difficult subject. Everything that’s popular music swings off the work and the achievements and the legacy of black artistry.”

The names of politically active artists are waved like placards at a rally in the singer’s lyrics: Billie Holiday, Curtis Mayfield, John Lennon, James Brown, BB King, Marvin Gaye, Pete Seeger, Bob Dylan, Woody Guthrie, Joni Mitchell. There is there’s also Patti, interpreted as both Patti Smith and Patti LaBelle. Singer and civil rights activist Mavis Staples, who is co-vocalist with Hozier on the song, also gets a mention. As does, of course, Nina Simone for whom the song is named. Simone, who was also an civil rights activist, recorded a version of Sinnerman, which features the lyric “I cried power”.

Traditional music journalism is an ageing profession and tends to display a “rockist” sentiment. Protest song is cryogenically frozen in the anthems of the mid-60s to mid-70s, to the point that it is seen as a historical genre, and not the underpinnings of contemporary music.

But in recent years a wave of American protest songs have become the bedrock of contemporary musical culture. Artists, mostly black, have addressed racism, police brutality, white supremacy, and the political rot that continues to eat away at American democracy like termites in the foundations.

To this, Hozier adds Nina Cried Power. It is a song that at the very least sizes up to his previous works from his eponymous million-selling debut album. It contained the massive, Grammy-nominated hit Take Me to Church, a song that took on a new political meaning when it was elevated by a music video depicting homophobic violence.

At that point, Hozier marked himself out as a different kind of artist. He was not to be some anodyne, watered-down singer-songwriter, even if his music was to reach the masses. As part of a generation of young Irish people who have participated in transforming their country, Hozier puts his politics front and centre. He has added his voice to those campaigning for marriage equality and joined Repeal marches. He has played to demonstrators at the Stand for Truth rally in Dublin during Pope Francis’s visit. He has donated the proceeds from his recent live rehearsal gigs at the Academy in Dublin to Safe Ireland, One in Four and the Peter McVerry Trust. He has campaigned to raise awareness of violence against women, and played countless charity and fundraising gigs.

Yet for all the waking, or wokeness, characteristic of Hozier and other musicians there is also the rising. There is a generational shift among young people in Ireland who want to broadcast a message of progress out into the world. This is a country that loves to brag about its art, but is less enthusiastic about funding it. Yet the artists still rise and still transmit.

It is hard not to view Hozier as a significant component in a broader movement of Irish artists. Their influences, education, intellectual confidence and technical competence has ascended the monocultural introspection of the past. They gravitate towards political discourse more in tune with the eruditeness of Michael D Higgins’ speeches than the finger-gunning techspeak of Fine Gael.

It’s Saoirse Ronan talking about reproductive rights on a chat show or John Gerrard’s staggering artworks examining, for example, renewable energy. It’s Joe Caslin unveiling a large-scale public art work tackling the issue of sexual consent and Sally Rooney crafting characters who discuss communism and privilege. It’s also THEATREclub’s work that confronts corruption and power structures; the art collective Subset, whose latest mural lends support of activists currently occupying properties in Dublin; or Ireland’s hiphop scene with rappers shirking the tired macho cliches of yore and instead carving out reflective and honest narratives. Hozier is part of this school by generational design and geographical default. And what a school it is turning out to be.

These things are often accidents of zeitgeist. As Bruce Springsteen put it when his song The Rising was performed at the Kennedy Centre in early 2009 in the run-up to Obama’s inauguration: “You’re swimming in the current of history and your music is doing the same thing.”

It’s not the waking, it’s the rising. What happens after you wake? You get up.