Journalism Matters: Irish Times view on the future of newspapers

If the rich ecosystem of the Irish press is to survive, it needs to be cared for by a supportive public policy 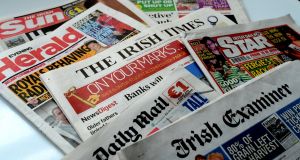 When Donald Trump repeatedly targets newspapers as “the enemy of the people”, it is a bleakly backhanded compliment. File photograph: Alan Betson/The Irish Times

A few years ago, it was easy to imagine that newspapers were becoming irrelevant in a digital culture. This has been disproved in the most disturbing way. If an independent press no longer matters, why is it being attacked so relentlessly by reactionary and authoritarian governments and movements all the way from the US to Russia? When Donald Trump repeatedly targets newspapers as “the enemy of the people”, it is a bleakly backhanded compliment. When Vladimir Putin, Recep Tayyip Erdogan and so many other despotic rulers set out to control what newspapers report and to undermine or outlaw those who will not be tamed, it is a stark reminder that a free press is every bit as essential to democracy as it has ever been.

In 1810, the Irish playwright and parliamentarian Richard Brinsley Sheridan set out a challenge to the enemies of freedom at Westminster: “Give them a corrupt House of Lords, give them a venal House of Commons, give them a tyrannical Prince, give them a truckling court, and let me have but an unfettered press. I will defy them to encroach a hair’s breadth upon the liberties of England. ” This was a rhetorical exaggeration. Democracy needs dynamic parliaments, capable and decent politicians, fair courts and public-spirited administrators. But it also needs a free, robust and independent press. Citizens need to be informed and institutions need to be held accountable. However imperfectly, newspapers do so.

The enemies of democracy everywhere understand this very well and it is time that democrats in Ireland fully grasped it too. The primary responsibility to sustain Ireland’s vibrant tradition of local and national papers lies with themselves. They have, by and large, responded vigorously to the challenges of the digital age. Both broadcasting and social media continue to depend very heavily on newspapers for the stories that fuel them. With all their flaws and limitations, newspapers are more widely read than they ever were – if not in print then certainly online.

But the economic model which once sustained newspapers is broken. Online advertising revenue has been hoovered up by giant digital corporations. If the rich ecosystem of the Irish press is to survive, it needs to be cared for by a supportive public policy. The Journalism Matters campaign launched by the industry this week identifies five practical things government can do: gradually reduce the nine per cent rate of VAT on newspapers towards the zero rate that applies in other European countries; reform the hideously costly defamation laws; appoint a Minister for Media; establish a News Publishers Media Fund to support innovation; and invest in training for journalism. These are modest and sensible changes. Together, they would amount not just to the Government helping to sustain a free and diverse press but to a democracy acting to protect itself.