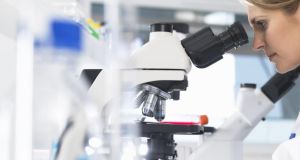 “Gifted, adventurous people are attracted to discovery and they seek the training that comes with fundamental research.” Photograph: Rafe Swan/Cultura/Getty

‘Innovate or die,” said Peter Drucker, adapting Darwin’s maxim “Adapt or die”. It has become the rallying cry of the 21st century. When every country wants the same thing, how can Ireland be more innovative than the innovators?

One obvious answer is to spend more. The Government rightly wants to increase national investment in research and development from 1.4 per cent to 2.5 per cent of gross national product by 2020.

But increasing investment will not in itself be enough. What’s important is what we do with the investment and how we balance fundamental research with industry-driven research. This is the only way to make the crucial breakthroughs that lead to ground-breaking innovation.

This is very bad news for Irish universities and for Irish innovation.

Industry-driven research is important, of course. Research needs to be taken to the market. But this is hardly a neglected area: industry does this sort of research as a matter of course.

Fundamental research, on the other hand, can only really be done by universities. Fundamental research requires labs and libraries, intense curiosity sustained by researchers working on one topic over many years; it requires critical thinking, creativity and the stimulation of inspiring colleagues embarked on a similar voyage of discovery.

If we keep going the way we are going, the innovation system will wither and die

Fundamental research is how universities – and countries – build their reputation. For example, in its early days Science Foundation Ireland (SFI) funded a lot of fundamental research and it was through this that academic stars such as Luke O’Neill and Johnny Coleman in Trinity College Dublin were able to make the great breakthroughs in immunology and nanoscience that led to their successful tech transfer.

That’s the direction research should go in – from fundamental to applied. This is a well-recognised phenomenon. Economists such as Mariana Mazzucato and Ha-Joon Chang have demonstrated that the stand-out innovations of the past three decades – including GPS, touch-screens and search algorithms – all originated from public funding of fundamental research.

Entrepreneurs such as Steve Jobs, Larry Page and Sergey Brin subsequently harnessed these discoveries into products and services. But it started with fundamental research.

The truth is that if universities don’t do this kind of research, we will become less and less relevant for industry – both in terms of our intellectual property and in terms of the talent we educate.

Whatever about its short-term prerogatives, ultimately industry is well aware that creativity and discovery enter the system only through fundamental research.

And it’s through fundamental curiosity-driven research that you train and attract talent. Gifted, adventurous people are attracted to discovery and they seek the training that comes with fundamental research.

The inconvenient truth is that Ireland is allowing fundamental research to go out of our system and this means that we are opting out of world science.

In July, Trinity, in partnership with government and Dublin’s other universities, launched a plan for the creation of an innovation district, centred on a new Trinity campus at Grand Canal Quay.

Successful innovation districts work by bringing together a critical mass of talent, finance, innovation and enterprise. And what they all have in common is a world-class university at the heart. What the university brings to the mix is, above all, fundamental research.

The Grand Canal Innovation District is not going to work if Trinity and the other Dublin universities do not have the capacity to do fundamental research. If we keep going the way we are going, the innovation system will wither and die.

When Jim Heath, named one of the world’s top seven innovators by Forbes magazine, came to Ireland a few years ago he had a very clear message for this country: “Do the science that supports the economy but also the science that is able to surprise.”

Patrick Prendergast is the provost of Trinity College Dublin