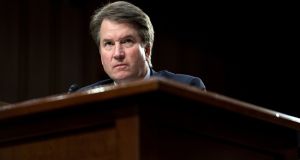 Tens of millions of people across the globe have been following the unfolding story of the allegations of sexual assault against US Supreme Court nominee Brett Kavanaugh.

Two women, Christine Blasey Ford and Deborah Ramirez, it is reported, are set to testify on Thursday before the US Senate Judiciary Committee to address their allegations, and to be given, what we hope will be, a fair hearing.

This whole case is unsettling. Not just because of the sordid details of humiliation, hurt, long-held trauma and inequality that underpin the stories that the women have told, but because the dominant establishment response to both the accusations and the accusers is to immediately dismiss, minimise, scathe and undermine.

It is incredible, it would seem, that a man of such high reputation, who is a Supreme Court nominee, could possibly engage in such predatory, debasing behaviour. One year after the re-emergence of the #MeToo movement, what this high-profile case is telling us loud and clear is that the default response of dominant power structures like politics is still a resounding “believe the man”.

It is perhaps the inevitability of this response that is most unsettling. It highlights a statement made by an Irish woman interviewed for a soon-to-be-published piece of research carried out by Safe Ireland estimating the cost of domestic violence. She said, in a very matter-of-fact way, that, “Women suffer from the man; then they suffer from the system.”

This statement is searing in its truth and simplicity. It is what Christine Blasey Ford and Deborah Ramirez are experiencing now in a very public forum. But it is also what survivors of gender-based violence here in Ireland are experiencing every day, silently, away from the glare of notoriety.

All you hear all along is you will get your day in court. No you don’t. You get five minutes to be abused further. It’s nothing else

There is a direct connection between the default position that women won’t be believed and this incredibly low level of disclosure. If the dominant response is that you can expect to be questioned, dissected, shamed and belittled for speaking out, why would you open your mouth?

In that same year a research project, called The Lawlessness of the Home, documented women’s engagement with the legal system with regard to partnership abuse and home violence. As part of this research, interviews were carried out with women of all ages, backgrounds and cultures. It found that survivors were more often than not being failed by the legal system that they so desperately needed to be supported by. Instead of feeling that they had been listened to, they felt they were, for the most part, not being taken seriously by the legal system, the crimes against them were not being fully investigated and they were not getting the full protection of the law.

As one of the women in this research summed up: “You don’t get to be heard in the court. This is the funny thing. All you hear all along is you will get your day in court. No you don’t. You get five minutes to be abused further. It’s nothing else.”

In 2016 another project, In Search of Justice, examined victims’ support in domestic violence related criminal proceedings. Again, interviews with women for this work exposed layers of control and prejudice that meant that women who had experienced horrific abuse and violence then had to suffer the indignation and heartache of not being taken seriously by many gardaí, GPs or judges, for example.

When one woman interviewed for this research called the local police station after she had been attacked by her partner, she had to first convince the on-duty garda to come up to her to take a statement.

“And he came and he asked me, ‘Are you sure that this is what you want to do?’ And then he asked me what I’d done to upset him. ‘What had you done to make him do that?’ he said. ‘Did you upset him?’”

These are just two examples of hundreds that we have documented about women’s inequitable interactions with establishment systems – all too often male-dominated ones – when they have been abused, beaten, controlled, coerced, intimidated and raped. When they really should have been believed and supported.

There are pockets and examples of amazing support for women across all systems here in Ireland, from judicial to policing to community welfare. Depressingly, however, the dominant response, just like we are seeing being played out in Washington DC, is still to dismiss her allegation, to minimise her abuse, and to make her believe that she is to blame for her own situation.

But pockets of good practice, while welcome, are not enough. What we need is a whole systems revolution that dismantles and disrupts the patriarchy and status quo that thrives on inequality and that protects itself by perpetuating doubt and disbelief. We need a whole new world view that is built on equality, tolerance, safety, love, and that responds to those who come forward with allegations of violence and abuse, by simply saying we believe you, and now, how can we support you.

Sharon O’Halloran is the chief executive of Safe Ireland