Great writers such as Joyce are the Irish equivalent of the pyramids in Egypt, the Colosseum in Rome

Dublin City Council has given the go ahead to plans to turn James Joyce’s ‘House of the Dead’ into a 56-bed tourist hostel. 15 Usher’s Island was once home to his grand aunts and the setting of short story 'The Dead'. Video: Bryan O'Brien 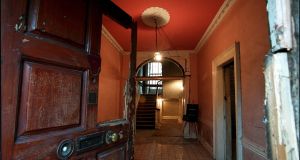 The interior of No. 15 Ushers Island where James Joyces story the Dead was set. Pic:Alan Betson

Could Irish Book Week have got off to a worse start? On Friday we read the disheartening news that planning permission has been granted to turn Joyce’s house of ‘The Dead’ into a 56-bed hostel despite objections from leading cultural figures at home and abroad, from the Department of Culture and Heritage, An Taisce, the National Trust for Ireland, the Irish Georgian Society, the Heritage Council, and from city councillor, Fianna Fail’s Deirdre Conroy, who is also an architectural historian. In granting permission for the hostel conversion and the installation of ‘a platform lift on front elevation’ as well as other substantial changes that will irreparably alter the building’s interior (which remains today exactly as Joyce described it in “The Dead”), Dublin City Council ignores all objections and does not deign to acknowledge the house’s Joyce connection.

If this redevelopment is allowed to go ahead, it will disfigure one of the most famous settings in modern literature. Back in the autumn of 2019, many of the world’s leading writers and literary academics, from Salman Rushdie to Edna O’Brien to Ian McEwan, signed a petition, drafted by Colm Toibin and myself, calling for the preservation of the house. These writers will again be backing a formal appeal against this planning decision and calling for the safe conservation of 15 Usher’s island as a vital national heritage site located not in Dublin’s periphery but, if one’s vision is not myopic, at its centre.

8 ‘I’m thinking of leaving him, as soon as I can get beyond the 5km limit’

10 Michael Harding: The woman at the checkout said my mask made me look constipated

11 Varadkar: €292,000 salary for top health job likely to lead to others seeking parity

13 National Rifle Association petitions for bankruptcy and reincorporation in Texas

14 Miriam Lord: Why did the secretary general cross the road? Because he’s worth it

20 Ireland should be wary as tech giants cancel Trump

22 Having Covid-19 can give immunity for five months but people can still spread it, study finds

23 Covid-19: Nursing homes to be prioritised for vaccination for 10 days amid supply shortage

31 TD calls for ‘serious scrutiny’ of Leave.EU group that relocated to Waterford

33 Risk school? The thought terrified me. How could Norma Foley even consider it?

37 Will the penny drop at Cork GAA over Mike Ashley’s track record?

38 WandaVision: The most audacious – and entirely bonkers – TV in recent entertainment history