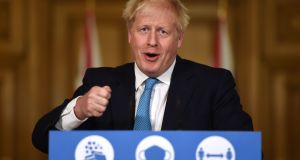 Brexit has reached another crisis point. The EU and UK must agree a trade deal to apply from January 1st or face a costly outcome with tariffs applying and potentially disruptive delays. Even if there is a deal there will be costs, but there is no doubt that they will be heavier in the absence of an agreement.

Given the extraordinary economic costs of the Covid-19 crisis the sensible course would have been to extend the transition period beyond the end of this year. However the UK’s decision not to request this has created an entirely predictable last-minute rush to conclude a deal. Time is now short given the need for approval by EU countries and the European parliament. The shape of a deal needs to emerge by the time EU leaders next meet on November 15th.

The latest move by UK prime minister Boris Johnson to say talks can only progress if the EU fundamentally changes its approach appears designed for a domestic political audience. The talks have made progress in recent weeks, but vital barriers remain – on fisheries, state aid and on how disputes will be resolved in future.

All can be solved. But as well as the substance of the issues, the question of trust between the two sides looms large.The UK’s publication earlier this year of the Internal Markets Bill which could lead to it breaching terms of the Withdrawal Agreement signed last year is one reason for this. Trade deals are fundamentally based on confidence by both sides that the other will play fair and abide by the rules.

Not reaching an agreement would carry big risks for both sides, notwithstanding the statement by British prime minister Boris Johnson that the UK can “prosper mightily” without a deal and EU preparations for this being stepped up. Ireland is the most exposed EU member and the tariffs that would follow a UK exit from the EU trading regime without a deal would deal a heavy blow to food exporters, particularly the beef sector. It would also push up prices in the shops and threaten disruption in the short term to goods moving between Irish and EU markets via the UK.

The backdrop of the Covid-19 crisis can, it is hoped, push both sides to make the necessary compromises. The recent EU summit did see suggestions that the EU side would give some ground on the issue of fisheries. The UK, meanwhile, needs to realise that access to EU markets requires it so agree to abide by certain rules guaranteeing fair competition.

The time for grandstanding is now at an end. Faced with the biggest economic downturn since the Great Depression, it would be folly on a grand scale for the UK to crash out without a trade deal. Yet apparently caught up by the grand delusion that Brexit can lead to a better future for Britain, it is still hard to know what Johson will do next.