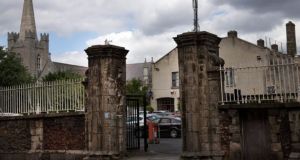 The centuries-old buildings at Kevin Street in Dublin occupied for many years by the Garda Síochána are to be saved for future generations.

After many years of uncertainty, the Office of Public Works (OPW) has now said that the Garda unit currently occupying the buildings will be moving out as soon as their new facility on Military Road is completed. And that could be as soon as 2022. When that happens, the OPW says, “it is the intention of the Commissioners of Public Works, being mindful of the historic and architectural significance of the building, to identify a suitable heritage purpose for it following its temporary use by An Garda Síochána.”

Indeed, Minister of State at the Office of Public Works Patrick O’Donovan has confirmed through his private secretary that the complex will be returned to a future cultural and heritage programme.

And that may well be the development of a suggestion from Jason McElligott, keeper of Marsh’s Library next door to the site, who believes the old Garda barracks could become part of a Swift Experience, a tourist trail for visitors and Dubliners alike, who are interested in or indeed fascinated by the author of Gulliver’s Travels, A Modest Proposal and so much more.

“The whole area around Kevin Street and St Patrick’s Cathedral is identified with Jonathan Swift, ” Jason said. “Indeed, he often walked from the old Archbishop’s Palace to our library next door. And of course he was the dean of our other neighbour, St Patrick’s Cathedral, where he is buried.

“He also set up what was effectively a credit union in the area, loaning small sums to people in the Liberties to set up businesses.

“ Once successful, they paid a small sum in interest, which provided more funds for more loans. So the whole area has his stamp on it.”

And nearby Fishamble Street, is where Handel premiered the Messiah – using the choirs from both Christ Church and St Patrick’s Cathedrals – though Swift is believed to have taken some persuading to allow his choristers to take part in an event in a music hall.

Jason said that already many tourists visit the area and its buildings associated with Swift. But the addition of St Sepulchre’s would make a trail which he believes could be hugely popular.

While the buildings have been occupied by police – first the Dublin Metropolitan police force and then the Garda Síochána – for more than 200 years, they were originally constructed as St Sepulchre’s Palace and were built on the instructions of the first Anglo-Norman Archbishop of Dublin, John Comyn, who was appointed in 1181 but who only arrived to take up his post three years later.

The first historical mention of the palace is from 1216.

And it has had its ups and downs over the centuries.

In the 14th century, it was damaged by troops who were defending Dublin from Edward the Bruce.

But it was restored by Archbishop Michael Boyle in the 17th century, though he little realised that by 1804 it would not longer be occupied by archbishops and that the buildings would become a barracks for the mounted police division of the Dublin Metropolitan Police. It has remained in use by police ever since, with the Garda Síochána moving in soon after the establishment of the force.

The most recent explorations found much of interest, the remains of medieval walls and, unfortunately, damage done by recent, archaeologically unsupervised pipe-laying. Indeed, one of the discoveries was that of plastic Wavin pipes in a robber trench, a trench that originally contained the foundations of a wall, the stones of which have been taken away.

Now it seems that officialdom has given the green light to the preservation of the site and buildings for future generations.

After the experience of Wood Quay, it will come as a relief to many that St Sepulchre’s and all that comes with it, is to be saved, explored and eventually opened to the public in some form.

I’m sure Jonathan Swift would have had something to say about the saga.