Diarmaid Ferriter: Demagogue Trump has exploited longstanding fissures in US

Protests have taken place across America following Donald Trump’s aggressive effort to challenge the vote count in the US presidential election. Video: Reuters 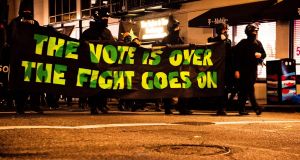 Protesters in Portland, Oregon, on the day after the US presidential election vote. Photograph: Kathryn Elsesser/AFP via Getty Images

The US presidential battle is a paradoxical tale of democracy and dictatorship. The images of hordes of voters lining up to embrace their democratic process sat alongside pictures of businesses being boarded up, in the context of a demagogue who repulses and invigorates in almost equal measure. The election is but one part of a system that evolved over the centuries to the point where a remarkable US election culture also sees its citizens voting for judges, sheriffs, senators, congress members, governors, state legislatures, school officials and even dog catchers.

We rightly commend a massive, communal democratic endeavour, and the high level of engagement with it, but we also need to acknowledge that Trump’s vote held up because the cult of the supposedly “strong leader” has always held a certain attraction for substantial sections of both the downtrodden and the wealthy, while others devote all their political energies to unseating them.

As a young student, I reached for Maldwyn Jones’s textbook, The Limits of Liberty to get a sense of the grand sweep of American history since the 17th century. Jones concluded that America by 1976, at the time of its bicentenary, after the discredited Nixon era, was anything but united. Other volumes on American history published in the 1980s also had titles that implied limitations to the American dream, including Barry Karl’s The Uneasy State, which explores why “Americans have a peculiar problem when it comes to identifying themselves as a nation”. Karl concluded there would be no settlement of this problem. But now, as in the 19th century, it is a crisis rather than just a problem.

How was the preservation of the United States to be managed in the midst of its divisions? Some believed the answer lay in strong presidents. Roosevelt, widely considered one of the great presidents, used his “fireside” chats to communicate his leadership and while these chats were not nearly as gentle as lore suggests they represented a clever evolution in presidential oratory.

Trump Revealed concluded he has no firm beliefs or moral centre, lies constantly and has no loyalty to anyone

Trump, in contrast, uses his tweets and pathological deceit to lob rhetorical grenades, and indirectly incite the use of real ones. Both men are part of a leadership story that began with George Washington, the first president, who was told by Thomas Jefferson that north and south would hang together “if they have you to hang on”. As a states’ rights advocate Jefferson was later to defeat federalist John Adams in 1800 and after the vitriolic campaign sought to stress the higher purpose of post-election unity: “We are all Republicans, we are all Federalists”. Abraham Lincoln won in 1860 in a campaign that changed America, but he was victorious with just 40 per cent of the popular tally and did not win a single southern state. Civil war followed.

It is hard not to think of the spectre of civil war once again. What has been extraordinary is the extent to which the Trump presidency has thrown into the melting pot the historical ingredients that have complicated the quest to define an American nation, including violence, race, wealth, tax, health and rural/urban divisions, and cooked them to boiling point. And there were only ever going to be two responses from him if he lost his bid for re-election: denial and demands for resistance.

This should not surprise. There was much appetite during the 2016 election to learn more about pre-president Trump, then best known as a blowhard salesman and a reality television personality. The substantial library of books published during his presidency have not added much to the cogent pre-election publication Trump Revealed by Michael Kranish and Marc Fisher that concluded he has no firm beliefs or moral centre, lies constantly and has no loyalty to anyone except himself. American journalist George Packer also suggested that year he was a “celebrity proto-fascist with no impulse control”.

Perhaps it was hoped by those appalled by him that celebrity and shallowness would not withstand the weight of the office, but that was a serious underestimation of what power would do to amplify his well-flagged traits and his ability to build a personality cult on the back of them. Even with a narrow Biden victory, there will be no neat resolution.

The 19th-century political scientist Alexis de Tocqueville, author of the renowned Democracy in America, published in two parts between 1835 and 1840, observed during his tour of the US how Americans navigated elections:

“Long before the appointed moment arrives, the election becomes the greatest and so to speak sole business preoccupying minds . . . The entire nation falls into a feverish state; the election is then the daily text of the public papers, the subject of particular conversations, the goal of all reasoning, the object of all thoughts . . . As soon as fortune has pronounced [the victor], this ardor is dissipated, everything becomes calm, and the river, one moment overflowed, returns peacefully to its bed”.