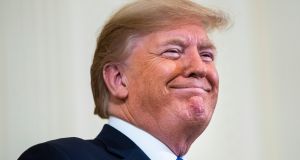 US president Donald Trump: It’s good to know that despite three years of his presidency, the country still has a civic pulse. File photograph: Jim Lo Scalzo/EPA

Impeaching a president is the most consequential thing the US Congress can do – other than declaring war. So, after great consideration, I say: President Donald Trump not only should be impeached, he must be impeached if America’s democracy is to remain intact.

Why? Because the facts here are not in doubt – indeed Trump’s allies in the media and Congress have largely given up disputing them: Trump held up congressionally directed taxpayer funding to strengthen Ukraine’s military against Russia until the new Ukrainian president agreed to do what Trump called a “favour” – announce that Ukraine was investigating Trump’s most likely opponent in the 2020 presidential election, Joe Biden, and his son, who was involved with a Ukrainian gas company. Trump apparently thought that just the announcement of such an investigation would kill Biden’s campaign in its crib.

Generally speaking, I believe presidents should be elected and removed by the voters at the polls. But when I hear Trump defenders scream, “impeachment subverts the will of the people,” I say: “Really? What the hell do you think Trump was doing in Ukraine?” He was subverting the will of the people by scheming to use our tax dollars to knock out his most feared opponent in the coming election – rather than trusting voters to do that.

The only reason the plot was aborted was that a whistleblower from the intelligence community drew attention to the president’s plan, forcing him to release the money to Ukraine – moments before his shakedown exploded into public view. Trump was like a bank robber with a gun to a teller’s head, who suddenly heard the police sirens approaching and ran off before he could stash the money in his bag.

So while the founders wanted to reserve removal of a president for elections by the people, they understood that there could be situations when removing a president might be necessary to protect and preserve our very framework for holding free and fair elections. That framework is the constitution and the rule of law – and this is one of those situations.

If we say, as Republicans do, that what Trump did is not an impeachable offence, we are telling ourselves and every future president – in direct contradiction of what the founders wrote in the constitution – that it is okay to enlist a foreign power to tilt the election your way. Can you imagine how much money candidates could raise from Saudi Arabia or China to tilt a future election their way, or how many cyberwarriors they could enlist from Russia or Iran to create fake news, suppress voting or spur outrage?

The integrity of our elections would be shattered, and we would never again have a legitimate president – a president, who, whether or not you liked him or her, was at least seen as legitimately elected. That would be a prescription for permanent political chaos, as no future presidents’ authority would be respected if they were elected on the basis of foreign interference.

But that is what Republicans are courting by blindly defending Trump’s indefensible enlistment of Ukraine’s help to take down Biden and by echoing Trump’s conspiracy theory – originated by Russian agents – that it was Ukraine that hacked the Democratic National Committee’s emails in 2016, not Russia. They also argue that the DNC’s server was shipped off to Ukraine before the FBI could look at it.

This is right out of The Twilight Zone.

Folks, can you imagine what Russia’s president, Vladimir Putin, is saying to himself today? “I can’t believe my luck. I not only got Trump to parrot my conspiracy theories, I got his whole party to do it. And for free. Who ever thought Americans would so easily sell out their own constitution for one man? My God, I have politicians in my own parliament who’d quit before doing that. But it proves my point: America is no different from Russia, so spare me the lectures.”

If Congress were to do what Republicans demand – forgo impeaching this president for enlisting a foreign power to get him elected, after he refused to hand over any of the documents that Congress had requested and blocked all of his key aides who knew what happened from testifying – we would be saying that a president is henceforth above the law.

We would be saying that our president is now a king.

If we do that, the America you studied in history class, the America you grew up knowing and loving, and the America that the rest of the world has so long admired as a beacon of democracy and justice will be no more. Oh, how we will miss it when it’s gone.

At a time when virtually every Republican and Fox News have chosen to prostitute themselves for Trump, I do see one glimmer of hope hiding in plain sight.

As the New York Times reported Saturday, incumbent presidents almost always benefit from a strong economy, and right now job growth is robust, and average hourly earnings are up – but Trump’s poll numbers are not: “Instead of enjoying anything close to overwhelming popularity because of the economy, Trump’s national approval rating has remained low, dropping about 2 percentage points to 41 per cent since the Ukraine story broke.’’

Yes, it’s the economy, stupid – when you have a president who is not violating his oath to preserve and protect the constitution. But if you read today’s poll numbers alongside the economy numbers, it turns out that more than a few Americans are saying, “It’s the constitution, stupid – and unlike you, Mr Trump, we value some things more than money.”

And most of all, we care about having a president who takes seriously his oath to preserve and protect our constitution. Without that, we will end up one day morally and financially bankrupt. How many Americans will still feel that way on election day remains to be seen and will also depend on the Democrats’ alternative. But for now, it’s good to know that it’s a significant number – that despite three years of Donald Trump’s presidency, the country still has a civic pulse. – New York Times

Thomas Friedman is a columnist with The New York Times

1 Gardaí may have to wait days to interview mother of McGinley children
2 McDonald and SF candidates sign pledge to be guided by ard chomhairle
3 Parents jailed over female genital mutilation of daughter
4 Ireland v Scotland: Doris’ day as Caelan set for first cap
5 No obvious signs of injury on remains of McGinley children
Real news has value SUBSCRIBE