The Irish Times view on the Ukraine-Russia peace talks: a deal – but not at any cost 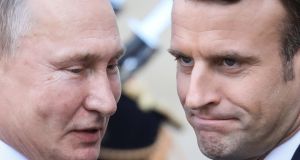 French president Emmanuel Macron welcomes Russian president Vladimir Putin upon his arrival at the Elysee Palace to attend a summit on Ukraine, on Monday. Photograph: Ludovic Marin/AFP via Getty Images

Nobody expected the first meeting between Volodymyr Zelenskiy and Vladimir Putin to produce a breakthrough in the frozen conflict in the Donbas, but the occasion itself was an important step towards easing tensions between Ukraine and Russia. Mediated by French president Emmanuel Macron – who hosted the leaders at the Élysée Palace – and German chancellor Angela Merkel, the meeting aimed to kick-start stalled talks aimed at resolving Kiev’s five-year conflict with Russia-backed separatists who have held territory along Ukraine’s eastern border with Russia since 2014. The fighting has killed more than 13,000 people and displaced 1.6 million.

Both sides have an interest in striking a deal. Zelenskiy, the neophyte comedian-turned-politician, won a landslide victory in May having promised to make peace with the Russians. For his part, Putin would like an easing of EU sanctions imposed after he annexed Crimea from Ukraine in 2014. Yet the two sides are far apart, and Zelenskiy in particular is under pressure at home not to make too many concessions to Moscow.

The focus of the talks is the Minsk agreement, a peace plan negotiated in 2015 that provided for the return of the border with Russia to Ukrainian control, elections in separatist-held regions and the disarmament and departure of Russian forces in south-east Ukraine. The two sides differ on the sequencing. Kiev wants to retake control of the border and the withdrawal of Russian forces before organising local elections. Moscow believes elections should happen sooner and says Zelenskiy is seeking to re-write the Minsk deal. Meanwhile, Russia insists on maintaining the pretence that it is not a party to the conflict.

Macron has been calling for greater European engagement with Russia and remarked last month that Moscow was not an enemy of the West. Concrete progress on the Donbas would strengthen his case. But a deal should not be struck at any price. The preservation of Ukraine’s territorial integrity and the removal of Russian proxies from its land ought to be non-negotiable.

1 Who are Ireland’s 17 billionaires?
2 Why has the pension age question suddenly become an election issue?
3 Man (23) doused in petrol and set on fire in Cork attack
4 Dr Eva’s Great Escape is everything Dermot Bannon’s recent show was not
5 Suspect in Keane Mulready-Woods murder inquiry arrested
Real news has value SUBSCRIBE