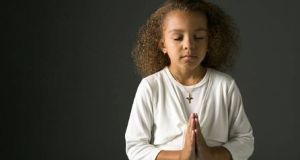 Arguments in favour of moving sacramental preparation outside the school day vary, and many focus on the sheer amount of class time already devoted to religious indoctrination. File photograph: Getty

The news that the Archbishop of Dublin has announced reforms around sacramental preparation in schools is to be welcomed. About 90 per cent of taxpayer-funded primary schools in Ireland are controlled by the Catholic Church and from junior infants to sixth class, half an hour every day is spent on religious indoctrination – not including prayers throughout the day. In those years when children prepare for confession, communion and confirmation, this ramps up significantly.

The arguments in favour of moving sacramental preparation outside the school day vary, and many focus on the sheer amount of class time already devoted to religious indoctrination. Teachers complain of curriculum overload and parents note that almost as much time is spent on religious indoctrination in a standard week (at least two and a half hours) as on history, geography and science combined (three hours in total).

However, these concerns do not appear to be central to this decision. The reforms come following a survey conducted by the Dublin archdiocese, and the motivation for change is to get families more actively involved, rather than to passively cede responsibility to schools. In other words, a religious organisation has made a decision relating to faith formation that aims to promote religious engagement. A pretty uncontroversial move, one would think, and that it is deemed newsworthy says much about the ongoing influence of the Catholic Church in State institutions such as our education system. Moreover, it surely merely reflects changes in Irish society – in 1993 more than 93 per cent of marriages in Ireland were Catholic, but by 2018 that figure was below 48 per cent.

None of the Minister’s business

Carl O’Brien, in this newspaper, gave an excellent overview of the proposed changes. The observant reader might note that there was no mention of Minister for Education Joe McHugh or the Department of Education in his article. This is not an omission or fault on the part of The Irish Times education editor – it was a common factor in media reportage on this issue. The fact is, the Minister for Education has nothing to do with this decision. When it comes to religious indoctrination in our taxpayer-funded schools, the Minister’s view is that it is essentially none of his business.

It is important to note that the plan to move sacramental preparation outside the classroom will not affect the daily 30 minutes of religious faith-formation that takes place in virtually every primary classroom in the country. Nor will it change the standard practice in these schools of segregating children from the “wrong” religious background for this period every day. That’s right, shockingly it is the norm throughout Ireland for children not of the Catholic faith to be singled out every day in the classroom from four years of age to sit alone at the back of the class while their peers receive faith-formation.

Nothing the Archbishop has proposed will address this disgraceful practice. Nor should it be the job of the Archbishop to do so – although it would be welcome and make for a refreshing change (not to mention that he must surely feel morally compelled to take action).

No, it is up to Minister for Education Joe McHugh to step up and do his job. The Constitution sets out the right of any child to attend a school receiving public money without attending religious instruction at that school. How does the Minister ensure schools uphold this constitutional right? The Department of Education says it is a matter for each individual school – there is no system of oversight or inspection. So we end up with children segregated in the classroom on the basis of their religious status, absorbing every word of religious indoctrination, while simultaneously othered from their peers. All in an effort to supposedly uphold a constitutional right!

What is being proposed for sacramental preparation is that children, parents and families can opt-in, should they choose to, after school hours. This blindingly obvious approach should apply to all religious indoctrination in taxpayer-funded schools and, indeed, is a logical, practical application of the Constitution’s provisions this area. It should not be left to the Archbishop to make this decision. The Minister must at last exert some influence over our taxpayer-funded schools by ending the systematic religious segregation and discrimination that has been allowed to fester for far too long. He must ensure that any religious indoctrination or faith-formation in our taxpayer-funded schools takes place outside school hours.

Paddy Monahan is policy officer with Education Equality which has started a petition to end the teaching of religious faith formation during school hours.