The Irish Times view on Myanmar at the ICJ: Paradox and contradiction 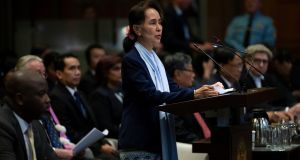 The case brought to the International Court of Justice by The Gambia against the state of Myanmar alleging genocide or genocidal intent in the crackdown on its Rohingya Muslim minority raises fundamental issues of international law and current politics. The appearance of the 1991 Nobel peace prize winner Aung San Suu Kyi as chief defendant of Myanmar in her present role as state counsellor dramatises the event, but should not take from the case’s importance for this and other threatened minorities.

The ICJ hears only cases brought by member states of the United Nations and relies on the UN Security Council to enforce its rulings – on this occasion for breach of the 1948 Genocide convention to which The Gambia and Myanmar are parties. The Gambia is supported by Canada and the Netherlands as well as the Organisation of Islamic Co-operation and bases its case on UN investigations and widespread reportage of atrocities, rape and torture in the expulsion of 740,000 Rohingya from Rakhine state in western Myanmar to Bangladesh two years ago.

Suu Kyi denies this is genocide, blames an insurgency movement for provoking the army’s actions and says illegalities are being addressed in domestic accountability. Both sides have powerful legal teams to argue their positions. Her stance appears paradoxical or contradictory and has provoked calls for her Nobel prize to be returned. Once a global symbol of the battle for human rights, she endured 15 years of house arrest by the military rulers she now defends, but insists she must be judged as a politician.

That makes the shocking treatment of the Rohingya none the less culpable, but this legal process demands a high test for genocide. The Gambia calls on the court to order that Myanmar ceases alleged abuses and preserves relevant evidence pending its ruling on whether the genocide case should be heard. That would take years. In the meantime the plight of the Rohingyas and its relevance for other endangered minorities has been highlighted valuably by the politics and international law involved in this case.