Finn McRedmond: If this is art, I am the idea of a banana 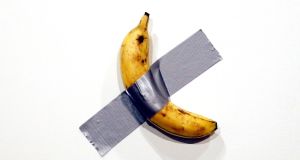 Until Saturday December 7th there was a banana duct-taped to a wall in a gallery in Miami. And although outwardly it resembled your common-or-garden banana, this particular specimen would have set you back by a cool $120,000.

Maurizio Cattelan’s artwork – Comedian (2019) – was already one of those rare art stories that captured mainstream attention. The wildly popular tabloid New York Post deigned to mock the piece on its front page.

And all of this was before David Datuna – a Georgian-born American artist – arrived at the Art Basel festival, approached the duct-taped fruit, ripped it off the wall and ate the whole thing. It tasted like a regular banana, he said.

It doesn’t appear that Datuna is in that much trouble. The banana was promptly replaced. And, “he did not destroy the art work. The banana is the idea,” the gallery director, Lucien Terras, told the Miami Herald.

Naturally, this prompted far more questions than it answered – notably, who were the two art collectors who had $120,000 lying around to purchase the ‘idea’ of a banana?

The affair resurfaced the age-old and time-honoured debate about modern and conceptual art. People who consider themselves above the whole thing accuse fools of “falling for it”, those who “fell for it” consider the naysayers to be philistines.

The usual cries of “my seven-year-old could have done that!” were bandied about – and met with the response that of course he couldn’t have, what seven-year-old has the critical faculties to conjure up an art work that is both an actual banana and the idea of a banana at the same time?

And, all the art-world bores and poseurs were rolled out in full force to defend the genius of Cattelan’s Comedian as a succinct and timely critique of capitalism.

Amid the whole sorry charade there is some comfort in the simplicity of Datuna’s decision to just eat the whole thing, because he was “a little bit hungry at the time”.

Cattelan is an established artist – with his work often selling in the millions. A cursory glance at his back catalogue would reveal one of the centrepieces of his career to be a taxidermied racehorse (known as Tiramisu in her first life) suspended from an ornate ceiling. Another, a model of the pope that appears to have been struck by some kind of asteroid.

New York Magazine’s august art critic Jerry Saltz said in 2011 that his work was often dismissed “as a bunch of sight gags, one-liners” and – the most damning criticism of all for an artist – “kitsch”. Another of Cattelan’s famous works is a solid gold toilet heavy-handedly titled America.

So Cattelan may be a household name in the art world – but he’s enjoying a huge surge in notoriety now, thanks to Datuna’s stunt. Did Datuna exhibit a callous disregard for the subtleties and brilliance of conceptual art? Was his intervention art itself? A brilliant attempt to prove the point of the original concept while also wryly mocking it? Or did some guy just eat a banana?

Of course, everyone has their own view – it has become quite divisive. But what we should really do is applaud the whole thing as the perfect antidote to the suffocating earnestness that plagues the exclusive art world.

This year the coveted Turner Prize was awarded to all four nominees, as singling one of them out would have been incompatible with their values as artists, so they said. Oscar Murillo, Tai Shani, Helen Cammock and Lawrence Abu Hamdan – all of whom do great work – petitioned the judges to share the award between them “in the name of commonality, multiplicity and solidarity.” Snooze.

And too, the Booker Prize this year was split between two writers – although, we can’t blame either of the inimitable talents of Margaret Atwood or Bernadine Evaristo for this decision, as it was the judges themselves that cooked up this particularly egregious solution to remedy what they saw as an impossible choice.

In both of these cases the politics of banality won out in the end and the we are all left worse off for it.

Things that are supposed to be radical and challenging are instead forgone in favour of a comment on inclusivity, and the recipients end up with something more akin to a sports-day participation prize than the genuine accolade one of them ought to have received.

At a time when the art world seems so impenetrable and inaccessible, boring and simply not made for regular people – with the Turner Prize debacle not helping the case – stories from the industry receiving protracted prominence in the media should be celebrated.

Because, from an outsider’s perspective, the world is complicated and insular, run by a small cabal of the ultra-wealthy and the preserve of those with art history PhDs.

Whatever the merit of Cattelan’s oeuvre – I’m certainly no reliable judge – is secondary to the simple and universally accessible pleasure of witnessing a man devouring a $120,000 banana. Sorry, the idea of a banana.

1 Fianna Fáil may have just pressed the pause button on the property market
2 UK to prioritise EU trade deal over one with United States
3 Election 2020: 10 key questions to ask candidates on your doorstep
4 Terry Jones, Monty Python star, dies at the age of 77
5 Election 2020: Peter Casey to stand in both Donegal and Dublin West
Real news has value SUBSCRIBE