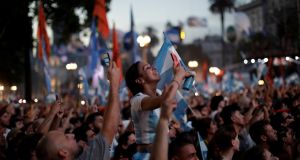 In Argentina it is normal for students of economics to be taught “the example of two countries”. The year is 1950. One country is hugely abundant in resources, with an educated population of go-getting immigrants, living in peace with its neighbours. The other has no natural resources and must import all its energy, while its culture has made it impervious to outside influences and its industry had been decimated. You would think that today, the first country would be wealthy and the second country would struggle.

The first country is Argentina; the second is Japan.

Back in the 1930s, Argentina was the seventh richest country in the world. Today it is the 77th. The second World War destroyed Japan. Two atomic bombs were dropped there and it was an international pariah. Yet the Japan of the 1950s, from the ashes, became one of the wealthiest places on earth.

Argentinian students are given a checklist of economic mistakes their country has made, the lesson being that successive Argentinian governments have done much harm while all the time suggesting they are acting in the national interest.

This is the sort of educational self-flagellation that many developing countries put themselves through when it comes to explaining why they have either become or remained poor.

I am not sure it’s that simple. Maybe poor countries remain poor because they are forced to play by rules set by others.

A thorough and honest self-assessment of domestic culpability is necessary for every country (as it is for any individual) if you want to figure out how you ended up where you are. However, when it comes to global economics, it’s clear that the playing field is not level. The cards are stacked against poorer countries. Once you get into a downward spiral, it’s difficult to get out.

I am writing from Argentina, where a new Peronist president, promising to kickstart Argentina, is – yet again – being sworn in. Alberto Fernandez is the president, but it is the vice-president (and former president), Cristina Kirchner, who is the real power. She is under numerous investigations for corruption, has already ruled for two traumatic terms and was thought to be politically dead in the water. But she is back.

The outgoing president, Mauricio Macri (beloved of the West and the IMF) made a total hames of things, despite being propped up by the biggest loan the IMF has ever extended any country. Christine Lagarde hailed him as the market-friendly saviour of Argentina. Today, inflation is running at 50 per cent. The currency is collapsing.

Today, I changed money on the street at 20 per cent discount to the official dollar exchange rate. And while unemployment and poverty are surging, the bars and cafes are jammed every night, creativity in the arts has never been more vibrant and the whole place has a Weimar feel to it, as people spend, spend, spend. Everyone is worried about what comes next, so they appear to be living for today.

It is easy to blame the Argentines for the mess but all over Latin America, from Mexico to Chile, Ecuador to Bolivia, Venezuela to Brazil, people are up in arms, lurching from one political axis to the other.

We need to examine the economic system in which these poorer countries operate. This brings me to the death this week of Paul Volcker, the former head of the Federal Reserve. Eulogies across the international press hailed a great man who tamed inflation.

Volcker raised American interest rates to 20 per cent to wring inflation out of the system, in what was a wonderful example of a central bank standing up to government. This precipitated a 40-year period of deflation in the West, where taking on more and more debt made sense, ushering in a bull market in stocks and bonds and an era of global financial capital, where money sloshed around the globe, driven by banks, private equity firms and hedge funds.

If you are from a developing country, particularly a Latin American one, Volcker is not associated with prosperity but with years of financial pain.

In the 1970s, Latin American governments borrowed heavily from US banks. The US banks got this money from Arab countries, awash with cash following the 1973 oil shock. The money had to be lent, and up stepped the Latin countries.

When Volcker jacked up interest rates to rectify US governments’ inflationary policy mistakes, Latin Americans faced a massive increase in their interest bill. In time they defaulted because the rules (and terms of the loans) had been changed unilaterally by the US. Latin American paid for the sins of North America.

Such boom/bust cycles, with money gushing in and out of a country, cause massive instability in that country’s currency

This was called “the Volcker shock”, and it knocked Latin America completely off course. Over the years there have been many deals done and many new loans extended, but ultimately the notion that the creditor and the debtor both pay when a loan goes bad has been abandoned. Instead, most Western initiatives have been driven by the desire to protect the lender. Who is the lender? The rich guy of course.

Another Volcker legacy is the free movement of short-term loans in and out of developing countries. This has turned the financial markets of these countries into little more than casinos for traders, where money floods in on so-called “good news”, such as a change of government, only to rush out again when that government doesn’t hit financial targets because the economy (as we all should know) is not a predictable machine but an erratic sociological phenomenon.

Such boom/bust cycles, with money gushing in and out of a country, cause massive instability in that country’s currency, which in turn undermines any form of long-term planning, reinforcing the initial instability.

These huge financial swings have clattered into fragile countries and they tend to follow the same pattern of over-lending and over-optimism, followed by a crash.

Again over-lending saw $1 billion flow into Argentina between 1872 and 1889. Money poured in, and inflation went up as demand went through roof. The Bank of England, fearing that too much English money was heading out of the country, raised rates, precipitating a default in the place most of the money had ended up precisely because rates, like in the US in 1982, had gone up, undermining the terms of the original investments.

Haughty attitudes to Latin American countries are exemplified by De Gaulle who, on a return from an official trip to Brazil, announced that “Brazil, is not a serious country”.

Strolling around this magnificent city of Buenos Aires, listening to locals worry about what is happening throughout the continent, it’s easy to see that the stories we tell ourselves about flaky developing counties don’t capture the full picture. In the process, not only do we do them a disservice, but we do it to ourselves too.