The old Shane Ross would have railed against rugby Bill 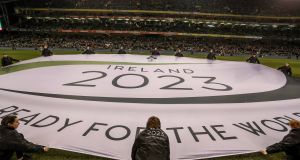 Few pieces of legislation in recent times have excited such public commentary and controversy as the judicial appointments Bill which passed its second stage in the Dáil on Thursday.

It’s fair to observe that few people previously identified the way judges are appointed as one of the pressing problems facing the nation. But Shane Ross has a different view, clearly, and his Bill – actually the preserve of the Department of Justice, though it would not have seen the light of day without Ross’s insistence – has now passed the first hurdle in the legislative process.

To his annoyance, it will not proceed to the next part of the process – when it goes to the committee stage – until well into the autumn.

Ross is being true to the beliefs that he has always espoused. Ross’s crusade against 'cronyism', 'insiders' and 'elites' is one of the defining themes of his public life

It has excited a storm of criticism, from a variety of quarters. Who knew that people were so concerned about the arcane procedures of judicial appointments?

There has been fierce criticism of Ross, who has not helped his own case by failing to outline a reasonable rationale for the Bill beyond generalised charges of cronyism. He has also, somewhat confusingly, described the Bill as both a minor change and a radical reform. It can be one or the other, but not both.

In fairness to Ross, he is being true to the beliefs that he has always espoused. Ross’s crusade against “cronyism”, “insiders” and “elites” is one of the defining themes of his public life.

His efforts to reform the judiciary may well be wrongheaded and ultimately damaging, but they are certainly consistent with the politics he has always stood for. It is to do things like this that he sought and accepted office.

But on Wednesday night Ross the Minister brought another Bill through the Dáil which I suspect the old Ross would have railed against. And he would have had a point. The Rugby World Cup Bill passed all stages in the Dáil late on Wednesday after a couple of hours debate.

It enables the Government to support the IRFU’s bid to host the 2023 competition by promising – among other things – to underwrite the entire cost of staging the tournament (probably about €200 million), as well as the €138 million fee for the right to stage the tournament in the first place.

The Bill was drafted in a hurry because former attorney general Maire Whelan, having advised the Government in February that legislation would not be required to offer the guarantees, advised in May that legislation would be required after all. So the Bill – providing the Minister with the power to underwrite the tournament – was prepared in haste and rushed through.

Aside from noting in passing that the affair marks another triumph for the former AG (luckily she’s only a Court of Appeal judge now), you’d have to figure there are serious questions about the whole thing.

None of which is to say that hosting the tournament isn’t a brilliant idea or that the Government shouldn’t support it. But the level of scrutiny and transparency is hardly what you’d expect.

Green Party leader Eamon Ryan sought to raise a few questions the other night. He asked, among other things, had the Government capped its potential exposure if anything went wrong. There is some experience in this country with offering guarantees that were never meant to be called on, after all.

"If he wants me to do that, he should say so. Otherwise, he should tell me to keep my mouth shut. I am keeping my mouth shut on that. We have a cap but I will not tell the deputy what it is, as he will understand. For him to demand that I tell him is unrealistic. It is absolutely out of the question.”

You can imagine what Shane Ross would have written in the Sunday Indo about that.

What exactly is the State signing up to do, and to guarantee payment for? As the clock ticked down towards the adjournment the other night, Ross whizzed through a quick list. “It relates to a guaranteed payment for the tournament fee, security matters, Garda resources for matches and fan zones, Garda escorts for teams, protection of commercial rights, including trademark and intellectual property protection, which was already referred to, clean zones around match venues that are free from non-tournament branding and sponsors, measures to tackle ambush marketing and unauthorised ticket sales, transportation capacity both internal and external, communications capacity involving the broadcasting and broadband infrastructure, as well as use of radio frequencies, anti-doping controls, visas for players, officials and spectators, tourism, the promotion of the tournament, accommodation, supporting parallel festivals and events, local authority assistance with local activation, involving the setting up of fan zones and traffic management.”

In other words, this is pretty significant undertaking by the State.

There’s no doubt that the State’s guarantee is unlikely to be called on. As Ross says: “The likelihood of the cheque ever being cashed is pretty small.”

Very few people would have a difficulty with the Government supporting the world cup bid. But the committal of significant public resources demands more attention and scrutiny than Ross afforded this.

Once upon a time, he would have agreed with that.