Una Mullally: I hate my iPhone - but I cannot live without it 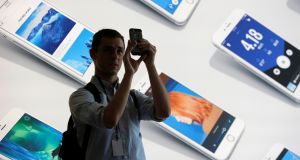 A man uses his iPhone during a preview event at the Apple Store in Williamsburg, New York City, US. File photograph: Andrew Kelly/Reuters

The iPhone has just celebrated its 10th birthday. When the iPhone launched in the US on July 29th, 2007, it sold 1 million units within two months. To date, well in excess of 1 billion iPhones have been purchased.

Much like the lyrics of a 1980s power ballad, or the script of a dodgy daytime soap, I hate it and I can’t live without it.

I don’t think there is a product that has changed my life more. It fostered internet addiction, created separation anxiety when it wasn’t to hand, encouraged overwork, and led to a waning attention span.

The iPhone spurred on technology evangelists, as if nothing digital could ever be wrong, leading us towards a world where privacy is a residual memory and narcissism is an integral part of online identity.

Phone addiction is now a default setting. It’s no longer worth commenting on when you see a couple sitting opposite each other staring at screens, or entire carriages of public transport with their necks dropped, ignoring the world around them, or restless toddlers being appeased by handing them a screen.

Losing your phone has become less of an inconvenience and more of a terror. The memory of disconnecting and not being online gets blurrier every day.

The gimmicky apps, the games and noises, were the phone’s toddler phase. Gradually, we allowed iPhones to just do everything for us.

As a result, our phones, the technology companies that make them, and the software that lives in them, know more about us than we do ourselves.

The iPhone initially created the exciting sense that we could always be “on”, that we were connected to everything no matter where we were. However, as the ultimate smartphone, it began to erode discovery.

Reviews of cafes and restaurants are now referenced en route to them, lest we be surprised. Maps laying out our walking and driving routes mean we never get lost.

Never being offline, constantly being connected, always being available, and always having the ability to communicate, shoved us into an “on” mode that can go so far as to disrupt sleep.

The endless opportunities for to-do lists, reminders, stuffing calendars with tasks and note-taking, as well as accessible email on the move, brought work into our pockets.

The iPhone ushered in a new cult of “busy”, coinciding with a generation destined for insecure work, zero-hours contracts, multi-self-employment, and office-less jobs.

With talking on the phone now too much hassle for humans, who oddly seem happier to retreat into screens than look at or speak to each other, text-based communication became the default thanks to WhatsApp and iMessage.

Images and video also won, from emojis to streams of ourselves, as people began filming themselves walking down the street and talking into their phones, before putting it out into the world.

It was the foreword-facing camera, a feature of the iPhone 4, that changed everything again in 2010.

Seen as a necessary piece of hardware for the iPhone’s FaceTime software, it heralded the age of the selfie, permitting and compounding a movement towards digital narcissism from which there is probably no turning back.

The iPhone’s impact was so huge, it’s not viewed as bad or good, it just 'is'

That forward-facing camera finally allowed for the ultimate retreat into technology. We could stare at it, and we ourselves would look back at us. The window became a hall of mirrors.

Identity morphed into digital identity, the broadcast of which in turn fed back into offline identity. Eventually, the two identities became so muddled it’s now hard to tell which is which.

What next for the phone that changed the world and its population? Apple hasn’t innovated since the iPad, proving that, in a way, success is a catalyst for failure.

Instead, they have tweaked and replicated existing products and solidified Steve Jobs’s position as a contemporary Edison.

Asking Siri did become a precursor to the connected home assistants that turn our lights on and off and search local takeaways.

As “things” become more connected, phones will likely become more embedded in us – and us in them.

Perhaps the greatest addition since the front-facing camera was the fingerprint sensor. Those biometric features will certainly continue to develop, inevitably encompassing facial recognition and iris scanners.

Are we better off with it? With concerts viewed through phones held aloft? With human interaction removed as often as possible, replaced instead with “sharing”? With mobile pornography? With knowing we can know anything we want when we reach into our pockets? With using our phones instead of our brains? With publishing and broadcasting on the go: our images, our thoughts, our deaths?

The question is redundant. The iPhone’s impact was so huge, it’s not viewed as bad or good, it just “is”.

Even as some become nostalgic for the “dumb phones” of the past, the minute the iPhone hit the shops, there was no way back.