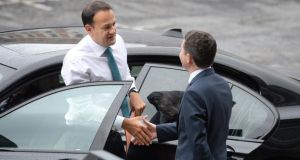 The Taoiseach, Leo Varadkar, struck a sunny note on Wednesday at the opening session of the National Economic Dialogue in Dublin Castle.

“For the first time in a decade, Varadkar said, “we have the opportunity to think about the future with new hope and ambition.

“Ireland has been the fastest-growing economy in Europe for the last three years. Unemployment is down, incomes are up and inequality is narrowing.

“And as the budget approaches balance, we have some more scope to make decisions about investment in the future.”

The National Economic Dialogue is attended by what used to be known as the social partners – unions, employers, farmers, civic and voluntary groups and so on; the sort of people who will be seeking to influence the budget come next October.

So Varadkar was also at pains to stress the limits of what would be possible. He was telling them that his Government will have some money to give then. He was also saying: don’t get carried away.

The meeting at Dublin Castle (the “NED” in the acronym-littered argot of official Ireland), which continues on Thursday, is part of four public stages that culminates in budget day itself in mid-October.

The first was the stability programme update, the Government’s April report to the European Commission. The second is the NED.

The third one is the summer economic statement, likely to be delivered the week after next, which will update the state’s fiscal and economic position, sketching out the realm of the possible for the budget-day package, and what might influence it.

And the fourth is the budget-day announcement itself.

Behind closed doors, a parallel process in which the spending departments bid for increased resources from the Department of Public Expenditure – which has been under way for several weeks now – gradually increases in intensity as the budget approaches.

It reaches its apotheosis in the sometimes fraught budget bilateral meetings between the public expenditure Minister and his counterparts in September and early October. That’s where deals are cuts and compromises made.

Meanwhile, in late July, the Department of Finance will issue the tax strategy papers which will outline a range of revenue-raising options for the Government. With Varadkar signalling on Thursday that some taxes may go up to allow others to come down, these will be watched with especial interest.

Economists and policy wonks always point out that the budget boondoggle is slightly absurd; Ministers spend months haggling over the few hundred million euro that comprises the budget-day package, while nobody pays any attention to the rest of the €60-odd billion the State spends.

They have a point. But there is more to politics than policy and economics, and the budget is a vastly important communications opportunity for the Government – one of the few occasions in the year when it gets to talk directly to the public on matters that affect their daily lives. You can’t take the politics out of making a budget.

This is true internally as well as externally – Ministers haggle for extra resources and in coalition governments such as this one, the minor partner’s Ministers will have their own spending demands that political reality means have to be met. The present situation is complicated by the need for Fianna Fáil’s assent in advance of the package.

Having a little wriggle room is sometimes harder politics than having none at all. The fiscal space – the total available scope of spending increases and tax cuts – is just €560 million or so, and from that has to come some €200 million for the public-sector pay deal.

There are, of course, ways that the fiscal space – and consequently the bag of goodies that the Government gets to dispense on budget day – can be expanded.

For all that Minister for Finance Paschal Donohoe tells people that he can’t spend money he doesn’t have, he knows a few tweaks to the complex formula that produces the fiscal space number can yield hundreds of millions in permitted extra spending.

It happened in 2015 and again last year, to the alarm of the Fiscal Advisory Council, the Government’s budget watchdog. The FAC said the budget exceeded the limit of what was prudent, but you’d hardly rule out a similar wheeze this year.

That would expand the size of the budget but nothing can expand it to the size where it keeps everyone happy. Whatever it does with the budget, the Varadkar’s Government will have to make choices – where to tax, where to spend, on whom. These choices are the essence of politics in western countries.

On Wednesday, Varadkar gave an indication of his priorities – while the spending increases will be twice as big as the tax package, there will be tax cuts for working families, and if they have to be paid for elsewhere, so be it.

One thing that certainly won’t be any different to last year is the fact that the hoped-for (by some, at least) parliamentary involvement in the budget process will not be much more significant.

One of the pillars of the new politics, and its central, animating theme of a parliament empowered in relation to the executive, was that TDs would have a greater say in budget discussions and construction. A key element of this was the setting up of an independent Oireachtas budget office which would cost proposals, interpret and analyse Government spending and generally act as a briefing and advice service for TDs on budget matters.

It hasn’t happened. The Budget Scrutiny Committee will hold its hearings half-blind again. “To be honest,” says one person familiar with the issue, “we’ll be lucky to have it up and running for next year.” Some things change; others don’t.