Locals from the Jobstown area react to the verdict after six people were found not guilty of the false imprisonment of former Labour party leader Joan Burton and her assistant in 2014. 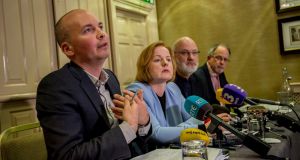 If the Jobstown trial was, as Paul Murphy and his comrades insist, a political conspiracy, it must have been one of the most inept conspiracies ever.

On Friday, Solidarity TDs Paul Murphy, Ruth Coppinger and Mick Barry called for a public inquiry into supposed political influence on the decision to prosecute party members. This is absurd. If the slightest amount of political intelligence had been brought to bear, these prosecutions would never have been taken.

The policing on the day was generally useless but the decision to charge the protesters with false imprisonment was idiotic. The Director of Public Prosecutions should be taking a long, hard look at her decisions on this. If charges were warranted at all, surely public-order offences would have made more sense, and been more proportionate?

The trial has given the Solidarity campaigners a huge propaganda victory, though I suspect conviction might have been even better for political purposes.

The political model of the radical left parties requires these radicalising moments – water charges, bin charges, anti-austerity campaigns – to give them a foothold in politics. They have demonstrated considerable application and political skill in doing so, translating public antipathy to austerity, especially in working class areas, into their largest Dáil representation ever.

Partly because some of their TDs are very able but also because of the distinctiveness of their political message, they command a disproportionate share of political debate. They have harnessed the political and campaigning power of social media better than any other party.

Yet for all that, their moment of true political opportunity may have passed. The economic crisis is over. Public finances will remain semi-tight for the foreseeable future, but the era of austerity is over.

The policies of the radical left parties – nationalisation of industry, higher taxes, a dramatic reorganisation of the state and the market – are not ones for which a wide audience is discernible. Their views on the structure of politics – that the street politics of protest is just as important and legitimate as parliamentary politics – are minority pursuits, to say the least.

The radical left has coherent political and economic ideas, for sure; they are just not very popular.

Sinn Féin’s brand of leftism has proved more successful, and its presence in the mainly working-class communities where the radical left parties and Independents base themselves has been a big brake on their growth.

At Friday’s press conference, Ruth Coppinger was asked if Sinn Féin could be a part of the new left platform Solidarity says it wants to build in advance of the next election. Her reply was delivered with a moue of distaste.

She didn’t see how Sinn Féin would qualify for a left alliance – too interested in coalition, insufficiently pro-choice; not committed to higher corporate taxation. Never mind that it’s hard to see a broad left alliance being very broad without Sinn Féin. Despite the fact they may be rhetorically on the same side, Sinn Féin and the radical left parties are each other’s deadliest political rivals.

Politics has changed since the crash; of course it has. Fianna Fáil, Fine Gael and Labour used to clock 90 per cent of the votes; now it’s not much above 50 per cent. Where previously only a small minority of the voters believed that the State and its institutions acted deliberately against their interests, that view is more widespread now. But going on rough electoral arithmetic, it’s hardly 20 per cent of voters. The idea that government is a conspiracy against the ordinary people is still very much a minority viewpoint. It’s not insignificant, but it’s nothing like the popular and transformative anti-establishment movements that have been evident elsewhere.

Radical left TDs such as Paul Murphy, Richard Boyd Barrett and Ruth Coppinger have dug in and consolidated their votes in their own constituencies in recent years; they are now a part of our politics.

But there is little sign that their political appeal has broadened. Partly that’s because their political ideas are not accepted by very many people, and partly because Sinn Féin’s parallel growth has limited them. There are only so many left-wing votes, after all.

But there’s another reason why, and it relates to the Jobstown trial. It’s also because not many people appreciate the political and campaigning tactics that some far-left activists employ.

Other people in the water charges campaign say privately that they were horrified by the aggressive edge that some radical left activists brought to the organisation. People began to ask whether it was safe to bring their children to protests, says one prominent campaigner.

I suspect that many people’s reaction to the trial is not so much that it was a political set-up but that what happened to Joan Burton was disgraceful. It wasn’t false imprisonment, but that doesn’t make it acceptable.

Politics can be a rambunctious game sometimes, and it demands a thick skin of all involved. That’s fair enough. But some radical left campaigners have engaged in bad behaviour too often, directed personally against their political opponents. That’s not right, and most people recognise that. Following someone around with a camera phone and calling them a f***ing traitor to post it on Facebook is not political activism; it’s just following someone around and calling them names.

4 Laura Whitmore: ‘I’ve had enough of being trivialised and gossiped about’

5 Coronavirus: ‘Great sign’ as number of ICU patients falls below 100 for first time in two months