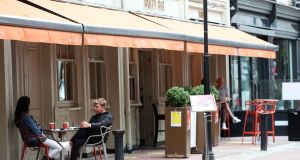 Duke Street in Dublin as the country prepares to lift more restrictions due to Covid-19. Ireland’s flaw in the past is the government has spent when we had money and been forced to cut back in recession. Photograph: Laura Hutton

We are all Keynesians now with governments around the world shovelling cash into their economies to try to at least partially offset the economic damage of lockdowns. Even uber-prudent Germany has engaged in an extraordinary spending spree, first to support businesses during the closure period and then this week announcing big VAT cuts, a €300 family bonus for every child and another round of business supports.

Ireland’s Achilles’ heel in the past is that the government has spent when we had the money and then been forced to cut back in times of recession. Boom and bust cycles resulted. This time around, having entered the pandemic in reasonable economic shape and with the budget in surplus, we have some leeway. Ireland is engaged in a big fiscal stimulus,with government spending in the first five months of the year up by more than 20 per cent . Fortunately the State can still borrow money at negligible interest rates to fund the deficit that is opening up, thanks in part to unprecedented intervention from the European Central Bank.

So can the next government float into office on a wave of borrowed cash which it can dispense? Not really. A careful reading of the recent report from the budget watchdog, the Irish Fiscal Advisory Council, shows that each stage of the crisis will bring its own challenges – and that we simply can’t budget on the basis of being able to borrow at current interest rates forever. We are walking a shaky financial tightrope as we move through this.

The hard calls start on day one for the next government. Yes, ministers will have the cheque book out – but the queue at the hatch will be long and not everyone will get paid. You could argue about just how high the deficit could be this year – and the answer might well end up north of 10 per cent of gross domestic product – but there is a limit.

As well as the contentious issue of the phasing-out of wage and income supports, there are calls from business for more cash, a line-up of State bodies with big financial holes and so on. There is a strong case to go the extra mile on the once-off supports – and Minister for Finance Paschal Donohoe hinted on Friday that more help to protect businesses and jobs would likely be needed. But deciding what will be subsidised through the crisis and what won’t will be hugely controversial.

And as well as once-off costs, the need to provide ongoing higher levels of spending – in health, childcare, education, public transport and so on – provides a big budgetary challenge. Donohoe referred this week to the likely need to continue borrowing in the years ahead to fund higher spending levels.

The programme for government, if agreed, and the subsequent national recovery programme may give some context to this and to how the public finances might evolve. Right now we need it . The “A” word is being thrown around in relation to every proposed reduction of an emergency support programme, and every refusal to throw additional cash at some other problem.

What we are facing is not austerity – which is when a government hikes taxes and cuts spending to reduce the budget deficit during a recession. That is what happened in 2009 and 2010. Now government borrowing is soaring. The issue is making decisions on where the money goes to and how much we can spend – all against a backdrop of huge uncertainty. Pretending there is some endless supply of cash and no constraint at all on borrowing into the future is just not credible.

Choices will also await in what the IFAC called phase two, which is when the Government goes to stimulate the economy via higher spending, probably moving into 2021 if the opening-up goes okay. The council pencilled in €10 billion as a possible stimulus, though said it should be “temporary and targeted”. Again, you can just imagine the queue of mendicants for this . The money will only go so far and only last so long – and continued restrictions in areas like tourism might leave some sectors unable to benefit .

The council’s central expectation is that the economy might return to its pre-Covid position in a couple of years. That would be a result. With the economy growing, there would then be a job in adjusting tax and spending over a period of years to get the public finances back on a sustainable path. The council guesstimated that this might involve tax hikes and spending cuts of €6 billion to €14 billion, probably starting in 2023. But it should be possible to avoid another bout of severe austerity.

The era of money for (almost) nothing won’t last forever. When it ends, we can’t afford to get caught out again, as we did in the last crisis

New government programmes, separate from the pandemic, will have to be paid for too and any credible programme for government must face the trade-offs. Not increasing the pension age, for example, will leave less to spend elsewhere. Green policies are vital, but come with a price tag.

We are facing into unprecedented uncertainty – we really don’t have any basis to decide how the next few months will go. The IFAC analysis shows just how delicate the outlook is and how a worse health outcome could cause real challenges

Economics is all about the allocation of scarce resources. And politics, over the next few years, will be too, and the uncertainties make this a lot more difficult. The ECB made clear this week that its programme to support the market would last until at least June of next year – and longer if needed. But it said, too, that it is a temporary intervention. And it would not be clever to assume current borrowing costs will continue for Ireland on the market once the ECB starts to wind down. The era of money for (almost) nothing won’t last forever. When it ends, we can’t afford to get caught out again, as we did in the last crisis.