Cliff Taylor: Scale of economic decisions too big for caretakers 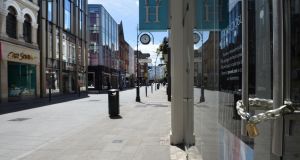 Really big decisions await on whether, if the infection figures are okay, Ireland should move more quickly in reopening. Photograph: Dara Mac Donaill

The outgoing Government has made the big, early decisions about the Covid-19 crisis. But it is starting to run out of road. The endless delay in forming the next government may be manageable – if the talks succeed and the three parties agree to form an administration before too long.

But if the talks collapse, trouble awaits as key decisions will be put on hold and legislation needed to enact measures already promised will face dangerous delays.

For example, the programme to support businesses, announced a few weeks ago, needs a couple of key pieces of legislation to be passed.

Longer-term decisions await too – or at least what counts as longer-term in the current crisis, which is probably anything beyond the next six weeks

These are already held up due to the inability of the Oireachtas to pass new legislation and if the talks collapse – perhaps leading to a general election – many businesses will run the risk of collapsing too, because they will simply run out of cash.

As Minister for Finance Paschal Donohoe put it in a speech on Friday, the Government’s response had to be shaped “at break-neck speed, with incomplete information and unclear outcomes”. This has got us to the start of reopening, with the virus suppressed in the community and wage and income supports in place – a significant achievement.

But for the next stage, where fire-fighting decisions are replaced by hugely complex questions and big, long-term commitments, we need a new government. Already, there are signs that cohesion is slipping and “getting things done” is awkward. The handling of childcare, for essential workers and the wider plans for reopening, has simply got stuck.

The Leaving Cert drama has bee allowed to wander on for too long, causing angst for students and parents. Some scheme is going to have to be patched together to allow for the Dáil to approve the budget needed for continued payment of the emergency incomes supports, no doubt involving no little political drama.

Longer-term decisions await too – or at least what counts as longer-term in the current crisis, which is probably anything beyond the next six weeks. We need a new government to decide on the future of wage and income supports, which are now set to be extended until August, perhaps with some tweaks.

And the promised national recovery plan, the framework to get through the rest of the crisis and reboot the economy – which is being worked on – needs to be agreed and set out.

This has been promised by June, but really it is a job for a new government – the bones of it might presumably emerge from the talks now under way.A crucial aspect of this will be a plan to get the public finances back in order, gradually, over the next couple of years. We can borrow – and will borrow – huge amounts this year.

But a strategy is needed for the public finances beyond that. We can’t have a deficit of 10 per cent of gross domestic product every year. The government talks will address this issue next week – and we presume this will bring them to the crunch point. Not before time, you might say.

We will also need a new government to make the key reopening decision in the weeks ahead. Yes, the roadmap has been set down, but we are told it is a “living document”, which is the nice way of saying it might have to change. Flexibility is the only sensible approach here. But our reopening plan is very much at the cautious end internationally and this has consequences.

Every lobbyist in the country will be knocking on the Government’s door looking for faster progress and more money for their sector. Really big decisions await on whether, if the infection figures are okay, Ireland should move more quickly in reopening. These are calls to be made taking into account public health advice, but there are political decisions.

If we don’t have a new government soon, will the acting administration really have the political authority to make them? And what will be the consequences of further delay if an election is needed and beyond that another period of soul-searching and negotiations is required?

The delay in legislation for business supports is one of the urgent issues. Two of the big ticket items in the recent support scheme announced for businesses require legislation – the credit guarantee scheme and the “warehousing” of tax payments due by the Revenue.

The Revenue is already exercising forbearance in relation to VAT and PAYE payments for business seriously affected, but primary legislation is needed to underpin this and in particular the zero-interest rate on arrears due to apply for a period.

Legislation is also needed to get the €2 billion credit guarantee scheme up and running, a vital tool in getting funding to businesses. A few more weeks may not make much of a difference here. But a few more months will – and businesses, many having had to shut their doors, need access to cash. Otherwise the doors won’t be able to reopen.

The Minister for Finance referred to another key area where decisions will be needed in his speech in the Dáil. He said new supports may be needed in sectors such as hospitality though they would have to be “tailored and targeted” and that the Government “will not keep unviable firms on life-support”.

Deciding which firms should be supported and which will never make it is a hugely complex job, particularly relating to the SME sector. It would be really difficult for a caretaker government to make these calls.

The Government responded to the crisis and made the big fire-fighting decisions. But opening up is a more complicated job than closing down – and huge social and economic decisions await. They can’t be taken by a caretaker administration. If the talks on a new government collapse, this will get messy. Very messy. And even if they don’t collapse, you’d really wish they would just get on with it.