The hunting of the Earl of Rone – and the Irish connection

An Irishman’s Diary: The festival was banned in 1837 after a man fell to his death during the debauches 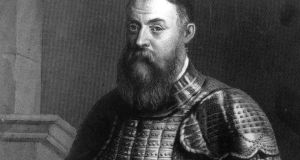 The “Earl of Rone” is presumed to refer to Hugh O’Neill (c1550–1616), aka the Earl of Ty-rone.  Photograph: Hulton Archive/Getty Images

It somehow passed me by at the time, but thanks to alert reader Rita Larkin, my attention has been drawn to a strange annual event that took place in Devon last month. It’s called “The Hunting of the Earl of Rone” and is the focus of great revelry in the village of Combe Martin every May, where its origins are thought to date from the 16th century, if not before.

In the intervening period, it seems to have lost something in translation. The “Earl of Rone” is presumed to refer to Hugh O’Neill (c1550–1616), aka the Earl of Ty-rone.  But that the placename’s first syllable, which in Irish means “country”, has been forgotten in England, may be an apt comment the history of these islands, up to and including Brexit.  Nor is that the only revisionism involved in the festival. The central event, according to devonlive.com, is “a re-enactment of the rebel Earl’s murder”, via a chase through the streets, which culminates with the dumping of his body in the sea.

Happily, as the report goes on to point out, the real-life earl was not killed anywhere, and certainly not in Devon.  After the Battle of Kinsale, he was forced into exile on the continent.  His hopes of a return with an invading Spanish army gradually expired there amid the shifting alliances of the era, until he died in Rome, of natural causes.

Even so, he is still hunted merrily through Combe Martin every year, while seated backwards on a donkey. “Hobby Horses” – which may or may not have historical significance – feature prominently in the pageant. And if there is any factual basis for the real O’Neill’s misadventures in Devon, they seem to arise from an unsupported theory that he was shipwrecked en route to exile, in a local bay called “Rapparee Cove”.

As the festival’s website admits, none of this matters these days and the history is now mainly an excuse for eating and drinking.  There has been too much of the latter in Combe Martin, on occasion.  The festival was banned in 1837 after a drunk fell to his death during the debauches.  But it was revived in 1974 and has since re-established its place among the eccentricities of the English summer.

Theories advanced to explain it locally include one that suggests might have originated with the hunt for a native outlaw, onto whose legend O’Neill was grafted, or that it could be an ancient Mayday ceremony, updated to suit 16th-century politics. The event may also have been adapted as a message to the area’s many Irish immigrants, formerly drawn to Devon by mining.

Whatever its truth, the now half-remembered “Earl of Rone” was certainly a bogeyman of his day.  Raised like an English gentlemen during the Tudor reconquest of Ireland, he played that part for a time while building up his Ulster power base.  Then he went native, claimed his ancestral title as “The O’Neill”, and in the Nine Years War (1594 – 1603), led the last stand of Gaelic Ireland.

A shrewd strategist, his tactics included artful deployment of the original hobby horses, a small but agile Irish breed that outmanoeuvred the bigger English mounts in wooded terrain, as at the Battle of Clontibret (1595). And after his victory at Yellow Ford (1598), he became what we would now call an existential threat to English rule in Ireland.

So much so, Elizabeth I dispatched the Earl of Essex and an enormous army of 16,000 to put him down, and was appalled when, having lost half his force on the way to Ulster, Essex then allowed himself to be talked out of battle by O’Neill, whose strategic skills were matched by a way with words.

Anyway, getting back to the “Earl of Rone”, 21st century style, I suggested earlier that the apparent partial amnesia about Ireland was apt, especially in these Brexit-strained times. And that may not be the only irony buried in the detail of the festival. The scene of O’Neill’s supposed shipwreck, Rapparee Cove, is named (in the words of Brewer’s Dictionary) for a type of “wild Irish plunderer” of centuries past, being an anglicisation of rapaire, or “half-pike”, their weapon of choice.

But of course, rapparees were not the only wild Irish plunderers to make it into the English language.  There were also the 17th-century Toiridhe, whose name became a joking shorthand for the English Conservatives.  Now, most 21st-century Tories have probably forgotten that they’re called after a breed of reckless desperadoes.  Even so, it looks as though they are about to choose a suitable leader.

1 Mary Lou has to call for the smelling salts as SF councillor deals a knock-out blow
2 Chris Hadfield on the climate crisis: ‘The world has seen much, much worse’
3 ‘He was some man’: Shane’s journey from care child to fearless activist
4 Could I go a whole year without buying any new clothes?
5 Ross O’Carroll-Kelly: I hate my father-in-law the same way dogs hate lampposts
Real news has value SUBSCRIBE