Young man in a hurry (x2): Frank McNally is misled by a ‘dangling modifier’

When the start of a sentence loses touch with the end 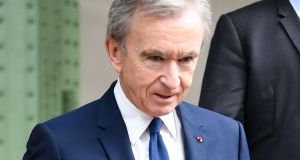 Bernard Arnault: Even the man who owns Christian Dior, Louis Vuitton, Dom Pérignon, and other luxury brands must have gone to school post-natally like the rest of us. Photograph: Christophe Archambault / AFP /Getty Images

I read an extraordinary thing in the Financial Times the other day, from an interview with the French business tycoon Bernard Arnault, Europe’s richest man.  Here’s what it said: “Born in Roubaix, an industrial city in the north of France, after completing the École Polytechnique, one of France’s prestigious grandes écoles, in 1971 he joined the family construction business.”

Gosh, I thought, no wonder he turned out well.  It reminded me of a claim – itself remarkable – in the biographies of Samuel Beckett, who is said to have retained into adulthood strong memories of his prenatal life, and associated feelings of “entrapment”.

Not only did Beckett have those generalised impressions, according to Anthony Cronin, “he had a particular memory of being at the dinner table in his mother’s womb shortly before birth”. There had been guests present “and the conversation was, perhaps needless to say, of the utmost banality”.

But even that detail now paled alongside Arnault’s achievement in completing the École Polytechnique before birth. Not that he could have done it alone, of course.  Most of the credit surely belonged to his mother, who brought him to the classes, and sat up front, where he could hear properly.

Oh, all right, I know this probably didn’t happen, whatever the FT claims.  Even the man who owns Christian Dior, Louis Vuitton, Dom Pérignon, and other luxury brands must have gone to school post-natally like the rest of us. The FT’s counter-suggestion was an upmarket example of what grammarians call the “dangling modifier” or “unattached participle”, in which the start of a sentence loses touch with the end.

Fowler’s Dictionary of English Usage has a long list of such sins, including one involving another luxury brand – Britain’s queen mother – and a letter to the London Independent once.

“While serving [. . .] as a sentry outside St James’s Place, on an extremely hot day in 1980,” the letter began, “the Queen Mother sent an equerry down who instructed my partner and I [sic] to perform our duties on the opposite side of the road which was shaded”.

Fowler is typically forgiving. Such danglers seldom lead to serious ambiguity, he admits: “They just jar”. And fair enough: speaking of jars, I can drink to that.

Elsewhere in the British press, meanwhile – although still on language and Gallic luxury – a piece of genuine news I learned this week is that the French equivalent of “to have your cake and eat it” is “avoir le beurre et l’argent du beurre”. Reflecting the country’s agricultural roots, this means “to have the butter and the money for butter”.  And no, even though I read it in the pro-Brexit Spectator magazine, it had nothing to do with Boris Johnson’s “cakeism”.

It referred instead to a financial scandal involving the French-style British bakery chain Patisserie Valerie, which collapsed into administration last year after the discovery of a £94 million black hole in its accounts.

One of the lesser secrets uncovered since by new owners was that, in an attempt to cut corners, the cash-strapped previous ones had resorted to using margarine rather than butter in pastry.  This policy had now been reversed.

Investigations into the financial irregularities are continuing.  In the meantime, the company’s crisis set the Spectator reflecting on the historic role of butter in corporate drama, including how Kerrygold marked the first big success of “princely Irish tycoon Tony O’Reilly”.

And it also caused me to relive a childhood shame, in which butter (or the lack of it) played a part.  The event happened during the annual “thrashing day”, the year’s busiest event on an Irish farm, when my mother had to make dinner for the more than 20 male neighbours who had come to help.

On this occasion, she ran out of butter, and had to put a half-pound of Stork on one table.  This was a terrible thing in the early 1970s, when nobody had yet tried to argue margarine was health food.

No doubt she hoped the men wouldn’t notice, or at least that they wouldn’t say anything. Unfortunately for her, she had made the parallel mistake of not allowing me a place among the adults, to which – being about eight at the time – I believed myself entitled.

Enraged, and having heard the embarrassed whispers back-stage, I exacted revenge by announcing loudly to the table the butter dish’s dark secret.  Then I ran out of the house.  And all these years later, part of me is still running.

1 Cycling or swimming, walking or yoga: What is the best exercise for you?
2 ‘I get paid to learn. I couldn’t recommend it enough’
3 A vegetarian and a non-drinker visit Ireland: here’s their verdict
4 Fintan O’Toole: Historians will not believe sheer ignorance of Brexit supporters
5 ‘I’m not going to go into any more detail’ - Varadkar faces drugs question again
Real news has value SUBSCRIBE