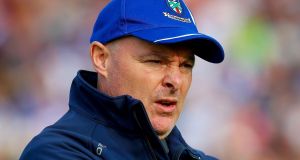 ‘As for the travails of Monaghan GAA supporters, I would hesitate to compare the seven years we had Malachy O’Rourke (above) as manager –a period that ended last Saturday night – with the time James Stockdale spent in the Hanoi Hilton. Photograph: Tommy Dickson/Inpho

‘It’s the hope that kills you,” is a phrase that will probably have been uttered by fans of all Gaelic football-playing counties except one by the end of this summer.

I used it myself last weekend, on the way to Clones, before hope itself was killed for another year. But even if the mortality rates caused by optimism are usually exaggerated in the context of sport, the phrase in general may have a grain of truth.

I’ve been reading about something called the “Stockdale Paradox”, now popular in boardrooms. No, it has nothing to do with the surprising speed of a certain Ulster and Ireland rugby player in relation to his size. It’s named after an Americanpilot, James Bond Stockdale, who died in 2005.

He was the independent Ross Perot’s running mate in the 1992 US presidential elections, when they won 19 per cent of the vote. But the defining event of Stockdale’s life, by his own account, was the seven years he spent as a prisoner of war in Vietnam.

He survived the infamous “Hanoi Hilton”, unlike many, and later attributed this to his certainty he would get out eventually. The seeming contradiction, however, is that when asked what the inmates who didn’t survive had in common, he suggested they were “optimists”.

His certainty of success in the long term, by contrast, was accompanied by acceptance of the grim short term. “You must never confuse faith that you will prevail in the end – which you can never afford to lose,” he said, “with the discipline to confront the most brutal facts of your current reality.”

It worked for him, anyway, and for its applicability as a business philosophy came to be dubbed the “Stockdale Paradox”: a phrase popularised by a 2001 book on the secrets of corporate success.  The IRFU should probably read that, seeing as how they have their own Stockdale in the business plan.

As for the travails of Monaghan GAA supporters, I would hesitate to compare the seven years we had Malachy O’Rourke as manager – a period that ended last Saturday night – with the time James Stockdale spent in the Hanoi Hilton.

On the contrary, our experience was great fun, mostly.   And if it did raise our hopes to dangerously high levels on occasion, the disappointments never lasted longer than two months. No GAA fans ever die of a broken heart, really (with possible exceptions in Mayo).

But speaking of rugby, I was often struck during those seven years by the parallels between Monaghan’s progress under O’Rourke and Ireland’s under Joe Schmidt.  Yes of course, a small GAA county is a very modest operation compared with the IRFU, not least in budget terms.

It’s just that the two men started (and are finishing) around the same time, took teams that had already been performing well but inconsistently for years, and made them more remorseless, reaping immediate rewards.

Ireland’s back-to-back Six Nations coincided closely enough with Monaghan’s two Ulster titles.  So did the respective corrections of subsequent seasons.  But then came 2018, when Schmidt’s team were unbeatable, and when I managed to attend nine Monaghan games, up to and including an All-Ireland semi-final, before seeing them lose (we were robbed).

You’re probably wondering where the All Blacks of my comparison are?  Well, at the risk of pulling the metaphor’s hamstring altogether, they wear Blue and Navy in the GAA.  And funnily enough, the record books show that on the last two occasions they met O’Rourke’s team, home and away, they lost.

Yes, that was only the League.  But fates kept the sides apart in the 2018 Championship.  It’s not our fault the mighty Dubs dodged a visit to Clones last July, when we were on a 30-year high. Anyway, the torture of optimism has been suspended for another summer in my case. So for now, I thank Malachy for seven great years.  And I pass on to the supporters of other non-Dublin counties, especially Mayo’s, my own version of the Stockdale Paradox. This states, as an utter certainty, that your county will win the All Ireland sooner or later; it just probably won’t happen before Christmas.

5 Air fryers: How good are they, really, and what can you cook in them?