Tech Titans making the world better; but for who?

It’s hard to cheer Musk’s big, cool, rocket, without thinking about how this wealth and power is being consolidated in the hands of a few 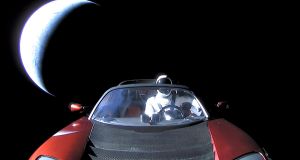 A cherry red Tesla Roadster automobile floats through space after it was carried there by SpaceX’s Falcon Heavy. Photograph: SpaceX/Handout/Reuters

Elon Musk may have been film-maker Jon Favreau’s reference point for Tony Stark in the Ironman films, but it is hard to know whether the guy is more superhero or super-villain.

Blasting a Tesla car into space was a fun gimmick. But nevertheless, Musk has created the most powerful rocket in the world right now, and it won’t be long until he’s blasting things into space that aren’t the billionaire’s version of schoolyard fantasies.

Space travel holds a remarkable fascination of some of the rich. Their wealth and ambition is too much for this planet, and so they must reach forth, with plans to colonise Mars, become a multi-planetary species, and utilise space as a new tourist destination (for those rich enough and sufficiently bored enough with Instagramming remote and hard to reach corners of the globe).

At a time where 42 people hold the same wealth as the 3.2 billion people who make up the poorest half of the world’s population, and when 82 per cent of global wealth generated in 2017 went to the top 1 per cent, perhaps, however, there are more useful things to be doing than looking to the stars.

Instead of high-fiving the coolness of rockets, should we instead be questioning the type of power and wealth that these guys hold?

Do the new masters of the universe – the Musks, Thiels, Zuckerbergs, Bezos, Pages, and so on – care about the world they live in, or just their versions of it? Is it actually about the toys they can build? The ways in which they can accumulate more power and wealth? The tactics by which they can protect themselves when things start going even further south?

The unchecked power of these tech billionaires has a strange serf-like effect on many people. They are willing to adore these guys from afar, at conferences, and elsewhere, because of their massive wealth and goofy, boyish cavalier attitudes. Kings, patrons, captains of industry, media moguls and energy barons may have enjoyed similar worship, but it’s the tech titans who rule the roost now.

We are told that these new overlords want to make the world “better”, but what does better look like to them? They are also creating futures where they are the one’s maintaining the power, more power than the leaders of nations.

While exploration is an ancient desire, there also seems to be a common outlook among tech kings that hovers around libertarianism, hyper-capitalism, and prepper-type behaviour. We read articles about the tech rich in the know buying up vast tracts of land in Hawaii, New Zealand, and South America.

There is a sense that the tech bosses have the inside track, and that the rest of the populations around the world will just mindlessly follow, and sway to their will. What are these guys doing to solve global inequality? Couldn’t those billions be better spent in technologies that are not about actually advancing poverty and inequality, such as automation and artificial intelligence?

So no, it’s hard to cheer Musk’s big, cool, rocket, without thinking about how this wealth and power is being consolidated in the hands of a few, and that those who preach evangelically about the innate goodness of technological progress are the ones who stand to benefit from it. Although, in fairness to Musk, he does bang on a good bit about how AI is humanity’s biggest existential threat and could potentially destroy us all, so that’s something to look forward to.

Back on Earth, while Musk’s ventures are extraordinarily advanced, his missteps are often very basic. Never mind him signing up to one of Donald Trump’s business advisory councils (before quitting over the last straw that was the Paris Agreement debacle – presumably the racism, sexual assault allegations and corruption were not insurmountable obstacles), or his donations to Marco Rubio. It’s the reports about how his Tesla factory workers were treated which are worth revisiting.

In 2017, the Guardian ran an expose on working conditions at a Tesla factory, where ambulances had been called hundreds of times since 2014 due to workers’ ill health. “I’ve seen people pass out, hit the floor like a pancake and smash their face open. They just send us to work around him while he’s still lying on the floor,” one worker said.

The factory may have robots named after X-Men, but the Guardian reported that before Tesla reduced hours in late 2016, “workers said they routinely worked 12-hour shifts, six days a week.”

If you can’t treat factory workers properly, are you really at the (space) races? It’s hardly rocket science.