Big cities and small homes: are we ready to start living like Europeans? 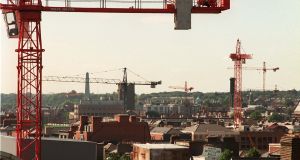 To stop the capital sprawling ever further outwards, Dublin needs to build upwards and become a much more dense city. Photograph: Cyril Byrne

Governments have a limited ability to have a real impact on the way people live their lives. Ministers talk up every announcement as a revolutionary improvement, but the reality is almost always more prosaic. Inertia is powerful both for political reason – change, after all, creates losers as well as winners – and because “doing things as they’ve always been done” is a powerful force.

This Government, like most others, will have only a few shots at doing really important things. One is the long-term planning and investment programme to be discussed by Cabinet on Monday and published over the next couple of weeks. If it is to mean anything – beyond the traditional share-out of spoils between constituencies – then it will actually change the way people live in years to come.

There are big questions about whether our political system can deliver this, or will inevitably lapse back into tit-for-tat warfare about who gets what. But there are also questions about whether, as a society, we will buy into it . To ensure this isn’t fantasy planning, the Government not only has to have the plan and the structures to implement it, it also has to sell it.

We can see that the current mix of urban sprawl and regional underdevelopment isn’t working. But are we ready to accept a new future of high-rise living in much-busier city centres, more renting and less buying and an acceptance that a few big urban centres will house the bulk of future economic development? For a nation built on the idea that renting a house is a waste of money and that every town should have an IDA advance factory in case the next Apple or Microsoft is looking for a new international HQ, this will be a big change. Are we really ready to turn European?

There is no doubt that successive programmes through the 1980s and 1990s, funded in part by the EU, were a major factor in our economic development and of living standards “ catching up” with other EU countries. But there has been a fundamental failure of planning behind this. Regional development in Ireland is an oxymoron and urban planning is not far behind.

The publication of this new planning framework alongside the Government’s long-awaited capital investment plan for the next 10 years shows an attempt to marry the two together. The message will be that this time it will be different. It is the right approach, indeed the only rational approach. The question is whether it can be delivered – administratively, politically and practically.

All the economic evidence and expert opinion suggests the plan will only work if our city centres become busier – and we accept that this is where the bulk of people will continue to work. Cities are the hubs of modern economic development – and can support wider regions around them with transport links.

There will be significant investment in towns across Ireland, too, but the rural pushback to get more investment here, there and everywhere – and to retain control of planning – is already under way. But if the plan is to work, there cannot be something for every town and village in the audience.

In this context, the chaos in the national broadband tendering programme following Eir’s recent withdrawal is particularly unfortunate. For tourism, SMEs, retailers, remote workers and just normal living, it is stating the obvious to say that broadband is now essential for rural development. In their lobbying, rural TDs would be well advised to forget about underused train lines and focus instead on this.

Under the draft planning framework being finalised, about half of the new jobs are targeted to be in the main cities and two-thirds within the cities and a small number of other large towns. The strategy is to double the growth rate of cities such as Cork, Limerick, Galway and Waterford – Sligo may also be added – though major investment and development and make them at least 50 per cent larger by 2040. Huge urban redevelopment projects will be central and links between these cities – such as the Cork to Limerick motorway. The hinterland of these centres will also be central to development.

In Dublin, the challenge is not to create growth but to manage it. To stop the city sprawling ever further outwards, Dublin needs to build upwards and become a much more dense city. This will involve redeveloping so-called “ brownfield” sites – those previously used but now derelict – and infill sites, together with freeing land owned by the State. It will mean more city-centre living, more renting and smaller homes.

Housing development would be matched much more closely with public transport and a new national planning regulator will oversee this. The new Metro to the airport will only make sense, for example, if housing development is planned along its route.

The Government’s first job is to sell the vision politically

None of this is revolutionary in terms of thinking – but it will, if delivered, mean big changes in the way we live. It is taking best international planning practice. It is trying to develop in a more sustainable and environmentally friendly way. It is costing and prioritising projects properly. It is a lot of stuff we haven’t been very good at in the past.

Can it happen? The Government’s first job is to sell the vision politically. Otherwise, come the next general election, can’t you just see how the TD’s from everywhere from Kilgarvan to Stepaside – to pick two places at random – will be condemning it all as unfair and looking for more for their own patch. And then there will be a real risk of the whole thing falling apart.

4 Fintan O’Toole: How does defence of trans rights become search for women to blame?