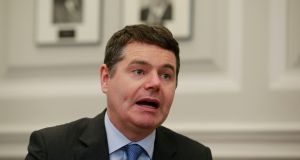 Rows between Government and Opposition in the Dáil and a heated debate at the Fine Gael parliamentary party over its contents have demonstrated the kind of pressures Minister for Finance Paschal Donohoe will come under before the final draft of the capital plan is unveiled. Photograph: Nick Bradshaw

It is vital that a realistic appraisal of the country’s needs over the coming decade should underpin the Government’s €115 billion infrastructural investment programme due to be announced in the coming weeks.

It would be unrealistic to expect that political considerations will not have some impact on the plan but there is a real danger that politics could undermine its core objectives. Rows between Government and Opposition and a heated debate at the Fine Gael parliamentary party over its contents have demonstrated the kind of pressures Minister for Finance Paschal Donohoe will come under before the final draft of the plan is unveiled.

It is an encouraging sign that the proposed extension of the western rail corridor does not appear to feature. There was never an economic argument for it and the opening of the new M17/M18 motorway which runs a parallel route has made it redundant.

The extension of the rail corridor was only on the agenda because of the political horse trading that led to the formation of the minority government. The good news is that realism appears to have prevailed over short term political considerations. The abandonment of a proposal to build a DART underground system in Dublin city centre looks like a signal to reassure rural TDs that the decision does not represent an anti-rural bias.

Nobody can complain if all elements of the plan, whether urban or rural, are subject to a rigorous approach based not only on purely economic considerations but on the most efficient way of meeting social needs.

A whole range of projects, including a new acute hospital in Cork, an extension of Dart services to Drogheda and a significant investment in social housing to ensure the provision of an additional 25,000 housing units between now and 2021 are also expected to feature.

A key objective of the plan is to promote the growth of cities such as Cork, Waterford, Limerick and Galway as a counterbalance to Dublin. Hopefully that aim will not be lost amidst the agitation for a greater focus on rural Ireland.

1 In six months we will be in the grip of a 1980s-style recession
2 Sweden should have done more to combat coronavirus, health chief says
3 With Lincoln looking on, the crowd dropped to their knees as 7pm approached
4 Luke ‘Ming’ Flanagan bares his bottom half to European Parliament
5 Michael McDowell: Black Americans fear the future and so should we
Real news has value SUBSCRIBE